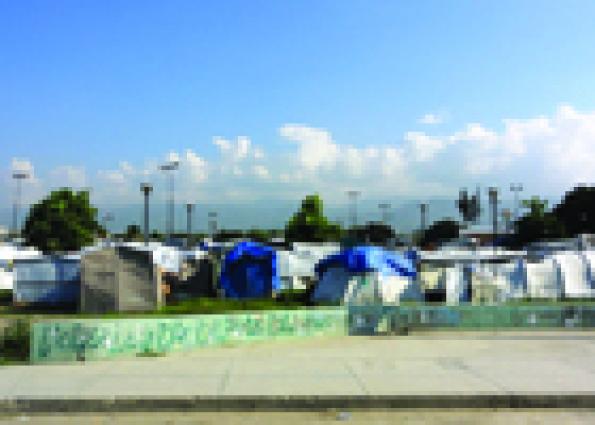 A consortium of WMO Members has been working with Haiti following the January 2010 earthquake, including Canada, Cuba, the Dominican Republic, France, Japan, the United Kingdom and the United States of America.

Matthew MacDonald, a Canadian forecaster working with the Meteorological Service of Canada, spent time in Martinique and Haiti this spring as part of the efforts to support the National Meteorological Centre of Haiti following the January 2010 earthquake.

Q. Why did you go to Martinique?
To help remedy the situation after the earthquake, the Meteorological Service of Canada, Météo-France and the UK Met Office agreed to provide weather forecasting support to Haiti. To this end, five Canadian meteorologists were deployed on a monthly basis to the Météo France forecast office in Martinique to work alongside the French forecasters and provide meteorological guidance during the 2010 hurricane season.

Meanwhile, five Haitian forecasters began training at the Météo France weather school in Toulouse. As the 2011 hurricane season approached, the Haitian forecasters had not yet completed training, so Canada agreed to renew its offer and deploy additional Canadians to Martinique.

Q. I understand you also visited Haiti.
After exploring the multitude of possible connections, I discovered a direct flight from Montreal to Haiti on Tuesdays with a continuing flight to Martinique. Abdoulaye Harou, the mission leader, supported the idea of a layover in Port-au-Prince with a visit to the forecast office. Ronald Semelfort, director of Haiti’s National Weather Centre, helped organize the logistics.

Esterlin Marcelin (one of the two Haitian forecasters) and a weather observer greeted me at the airport in Haiti. They escorted me to their office, which consists of two shipping containers behind the civil aviation office, a few kilometres down the road from the airport. Upon entering their office, I noticed automatic weather station equipment sent by Environment Canada over the past year. They explained that because of logistical limitations, their efforts were ongoing to install it.

We discussed the challenges and local effects pertaining to weather forecasting in Haiti, as well as some of their forecast tools. During my short three-hour visit, I gained a better appreciation of the difficulties in Haiti. It proved to be a highlight of my mission, and set the basis for our relationship for the following month.

During the short commute from the airport to the weather office and back, I witnessed the tent villages created after the earthquake and was sensitized to the difficulties of life in Haiti. It was easy to see how susceptible to heavy rain these people could be.

My three-day training was effective, thanks to Denis’ preparation and his past experience as an instructor. For the first day, I watched Denis complete the forecast process while he introduced me to the workstation and explained various forecast tools. The following two days, I produced and issued the forecasts under his supervision. This training format proved to be successful, so I employed a similar format to train my replacement at the end of the month. Three days of training are sufficient to become familiar with the forecast process, but it took an additional two weeks until I became comfortable with the intricacies of tropical weather.

Q. What did you learn about weather in Haiti during your assignment?
The weather situation in Haiti gradually deteriorated during my assignment. I was lucky to experience a benign weather pattern during my first week, so that I could grow more familiar with the forecast tools and understand the strong diurnal trend in the tropics. At the beginning of my shift, I would benefit from the briefing given by the forecaster working the Synoptic Forecast Center (CPS in French) desk. During the briefing, the Météo France forecaster would focus on conditions over Haiti, which greatly accelerated my learning and increased my understanding of tropical weather patterns. If ever I had additional questions throughout the day or wanted to verify my thought process, the CPS forecasters were always very accommodating and proved to be a wealth of information.

I soon learned that along with dynamic features such as upper level jets, divergence, and vorticity advection, humidity is one of the primary ingredients for severe weather in the tropics. More specifically, the potential wet bulb temperature (TPw) in the lower levels of the atmosphere proved to be a very useful forecast tool. Towards the end of my second week, TPw levels reached the highest levels I had seen since my arrival.

Fellow forecasters told me it was the highest humidity they had seen all season. Combined with dynamic support, conditions appeared ripe for significant rainfall and thus potential for flooding. Through “Yahoo Chat”, our primary means of communication with Haiti, I relayed my concern to the Haitian forecasters. After some discussion and further examination of the conditions, they agreed to issue a state of "orange"* vigilance for heavy precipitation for the upcoming weekend.

Considering that the worst conditions were forecast for a Sunday, our only scheduled day off, I made the decision to come into the office. This made for a thirteen-day stretch of forecasting, but the Haitian forecasters later expressed appreciation for the continued support. I sought feedback from the forecasters on how things unfolded, as they would receive internal reports from various departments and regions in Haiti. They informed me that although a few communities had received 40-60 mm of rain, no significant impacts had been reported. Both forecasters added that the skies were very threatening and many sought shelter Sunday afternoon, but the forecasted heavy rains never materialized. The state of vigilance had been somewhat of a false alarm.

Conditions over Haiti dried up slightly over the next few days, making for regular diurnal trend with showers and isolated thundershowers developing along the ridges in the afternoons. As we approached the end of my third week, conditions began once again to deteriorate. The remnants of the first tropical wave of the season slid towards Haiti, and were located with the right entrance of an upper level jet. After examining the setup with the CPS forecaster, we discussed the possibility of another significant rain event with Haitian forecasters. Given the quasi-false alarm the previous week, we debated reissuing a state of vigilance. After further examination and discussion with the director of the Haiti Forecast Centre, it was agreed to issue an "orange" vigilance bulletin for heavy precipitation.

The following days, we received several reports of heavy rain and flooding. Some areas received up to 120 mm of rain over 24 hours. Conditions gradually worsened in Haiti and casualties from a landslide were reported in Cap Haitien over northern Haiti. The vigilance was hence warranted and it probably prevented additional casualties and damage. After several days of rain, conditions finally improved.

As my final week approached, the models consistently showed the development of a tropical depression just southwest of Haiti. Considering the storm was forecast to affect Haiti as my replacement Magalie Fontaine arrived, I forewarned the forecasters by adding an extended forecast discussion to the technical synopsis bulletin we issued daily. Despite the active weather pattern during Magalie’s training, she adapted well to the work routine and was fully independent by the end of the three-day training.

Q. What observation challenges did you face?
The only observation we have access to is the METAR (Meteorological Aviation Report) from Port-au-Prince airport. I managed to find an agricultural automatic weather station to supplement the single observation, but I often had the feeling of forecasting blind. I also discovered that the eastern-most radar in Cuba covered parts of Haiti. Remotely sensed data such as Sat-winds, sea surface temperatures, and the estimation of rainfall from the Flash Flood Forecast Guidance System were key tools in improving forecast skill. Re-establishing the observation network would obviously be of great utility to forecasters.

Q. What recommendations would you have to improve the Haitian services, and to facilitate international cooperation?

Q. Is there anything else you would like to add?
I would like to express appreciation to Environment Canada’s Assistant Deputy Minister David Grimes for spearheading this honourable special relief effort. The experience was definitely a career highlight. Thank you to Abdoulaye Harou for coordinating the entire operation. I would also like to thank my manager Ian Okabe and the rest of the Pacific Storm Prediction Center for accommodating my leave while being short-staffed. Finally, a big thanks goes out to all the Météo-France staff. They were greatly receptive, accommodating and supportive.

* Four levels of vigilance: green, yellow, orange and red, red being related to the most severe weather conditions.→back