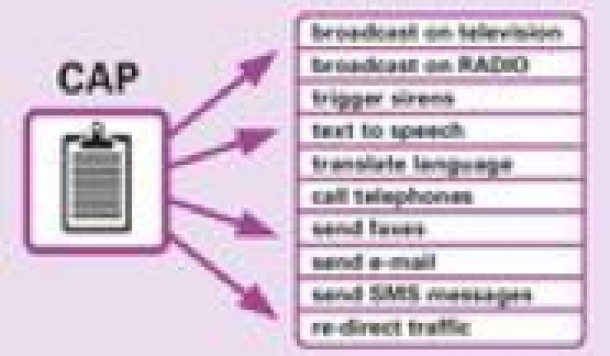 Alerting authorities have long relied on commercial media, such as newswire services, broadcast radio and television, to disseminate public warnings.

Now that a vast, ever-growing, public is online, warnings are also being issued there–and at minimal costs. For example, Google now shows official warnings to desktop and mobile users of Google Search and Google Maps. High priority warnings for specific areas appear on screen, which take into account what the user is doing and their personal settings. This Google Public Alerts service currently shows warnings from Environment Canada and Public Safety Canada (in English and French) and from the US National Weather Service and the US Geological Survey. ValueClick, one the world’s largest online advertising firms, offers a similar service with eye-catching graphics in the user’s language.

Both ValueClick and Google could be implemented at little cost for any alerting authority worldwide, all they need do is monitor Internet news feeds that use the Common Alerting Protocol (CAP, officially designated as the International Telecommunication Union T Recommendation X.1303) standard. For alerting authorities, this public dissemination over the Internet costs nothing extra.

The CAP standards promise great benefits – effective and efficient alerting systems – for relatively modest investments. Before CAP, the lack of a standard made it almost impossible to implement all hazard, all-media public alerts. With a CAP-based system, an alert sender activates multiple warning systems with a single trigger. For emergency managers, CAP is also useful for compiling standardized alerts from many sources, enabling pattern detection and "situational awareness." On one map, emergency managers can monitor the whole situation: all types of local, regional and national alerts, integrated through CAP.

CAP is not a complex standard to implement. It is like filling in a standard form with various boxes to check-off, giving specific details of the alert. The power of CAP is simply in standardizing the form’s boxes. For instance, any alert message must clearly indicate the area under alert; CAP specifies that this must be done either using a circle or a polygon shape with decimal latitude/longitude points. Standardizing how to represent the alerting area, which involves just one of the fill-in boxes on the CAP standard alert form is a great help to those who need to exchange this information.

Using "coded values" like polygons, rather than free text, makes CAP much easier to interface with automated systems. Of course, when natural language text is needed in addition to codes, CAP also provides for such text in whatever language is required.

Alerting authorities typically implement CAP as an add-on feature to their current alerting processes. They publish a copy of the alert, in CAP format, on their own Internet news feed. Any Internet media can monitor these news feeds and automatically disseminate critical warnings to online users in the alerting area. The media and public need to know, of course, which CAP feeds are official. For that there is the international Register of Alerting Authorities, maintained by the WMO and ITU.