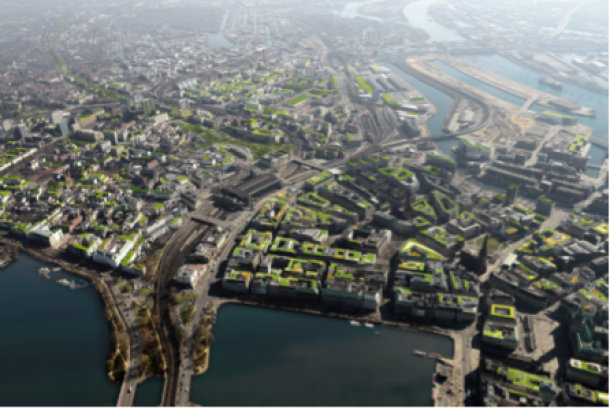 Today, the majority of German citizens live in cities where climate information is available to support city management and urban planning to reduce or minimize negative climate impacts on inhabitants. Detailed modelling of city climate is very complex and time-consuming, however, DWD has developed an online information portal for climate change adaptation in cities (INKAS). This is a decision-support tool that allows city managers to identify, assess and implement necessary climate change adaptation actions.

In Jena, DWD provided climate measurements and simulations for recent and future regional climate conditions, considering current and hypothetical future urban planning. The city used the information to develop its own local strategy for adapting to climate change. “Due to the increase of numerous trends, such as thermal heating in compact areas, dryness, especially in the summer months, or floods, JenKAS is an important milestone for the city and its citizens to better prepare to the impacts of climate change,” said Matthias Lerm, Department Urban Development and Town Planning of Jena. “Therefore, cooperation with DWD has helped to identify and better understand both temperature conditions during summer months and nightly cold air conditions.”

Simulations are frequently used to identify flows of fresh air into cities and to avoid blocking these by new building structures. Awareness of urban heat island problems, prompted the city of Hamburg to implement a green roof programme, which aims to reduce the effects by installing up to 100 hectares of green roofs by 2020.

Simulations for Frankfurt/Main show an increase in the number of warm days in the future. “For the first time the joint project between the municipal authorities and the DWD provided an estimate of the future urban thermal stress for the city,” said Hans-Georg Dannert, Office for the Environment of Frankfurt am Main. He explained that the simulations are an important basis for the city’s adaptation strategy and serve as a major guidance for environmental and city planning as well as for political policymakers.

Preview workshops have improved technical skills in crop modelling and the use of remote sensing products at the national meteorological and hydrological services of participating countries as well as improved their relations with the media for a more efficient and broader dissemination of weather and climate warnings and agricultural advices.

The final technical workshop will include a project evaluation and the definition of a new project.