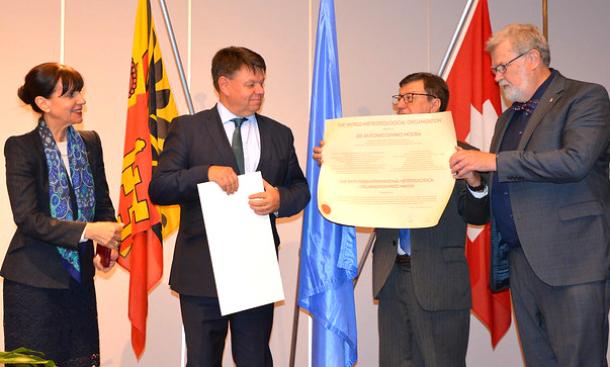 Divino Moura of Brazil received the WMO top prize for his outstanding work in meteorology and climatology and his leadership in science.

Mr Moura was recognized for his “scientific contribution towards a better understanding of the role of the Atlantic and El Niño in the regional and global climate and establishing a framework for climate–society linkages and climate services, for dedicated research work and forming a cadre of scientists aiming at modernizing Brazilian meteorology.”

His scientific lecture, delivered to Congress following the award ceremony, traced the early development of El Niño/La Niña forecasts and his efforts to inform Brazilian and international policy-makers about this major climate phenomenon, which was poorly understood in the 1980s.

Mr Moura is currently head of the Centre for Weather Prediction and Climate Studies, a branch of the Brazilian Space Research Institute. His contributions to WMO are numerous and span decades. He was Permanent Representative of Brazil with WMO and WMO First Vice-President between 2011 and 2016.

In the wake of Congress, Sergej Zilitinkevich was named as the 2019 IMO Prize laureate, and will be honoured at an award ceremony during a WMO Executive Council session in 2020.

Mr Zilitinkevich, who holds Russian and Swedish citizenship, was cited for his “ground-breaking inventions in the physics of turbulence and atmospheric boundary layers, which principally advanced our knowledge of the Earth system, endorsed progress in weather and air-quality prediction, and gave rise to novel climate services.”