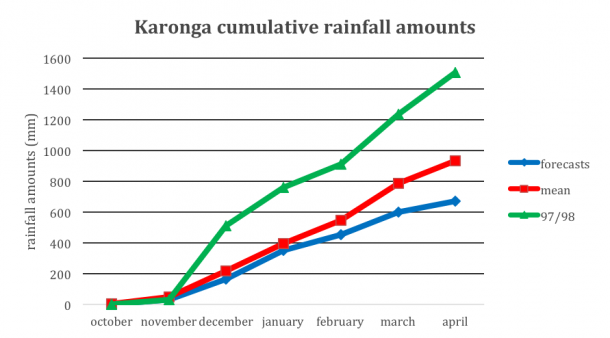 In 2015, the Tanzania Meteorological Agency (TMA) and the Malawi Department of Climate Change and Meteorological Services (DCCMS) embarked on a pilot project to downscale the Seasonal Forecast to the district level under the Global Framework for Climate Services (GFCS) Adaptation Programme in Africa. The initiative followed survey results that showed that users found the existing seasonal forecasts too general to be useful in informing actions and decisions.

In Malawi, the seasonal forecast for the unimodal rainy season starting in October 2015 was downscaled to all 22 districts in the country with technical support provided by the Finnish Meteorological Institute (FMI). The forecasts included information on the onset and cessation of rain, as well as on the probability of dry spells within the season. The forecasts also included a graph on the cumulative rainfall with information on analogue years (for an example, see graph below).

In Tanzania, the seasonal forecast for the October, November and December was downscaled for the districts of Longido, Kiteto and Kondoa, and issued in Kiswahili. The forecasts included advisories for health, agriculture and food security, water and disaster risk reduction (DRR).

In both countries, the Meteorological Services and their partners intensified dissemination efforts to users at the district level. Intermediaries trained by the World Food Programme (WFP) and the CGIAR Research Program on Climate Change, Agriculture and Food Security (CCAFS)  – in an approach that uses both historical climate information and seasonal forecasts to support decision-making at the household level for smallholder farmers  – joined this effort.

Initial feedback from users was positive. Surveys are being conducted to determine how users were able to act on the forecasts. Verifications will be made to determine the skill of the forecasts and to provide feedback for future downscaling. The aim is to make such downscaling the norm in both Tanzania and Malawi.