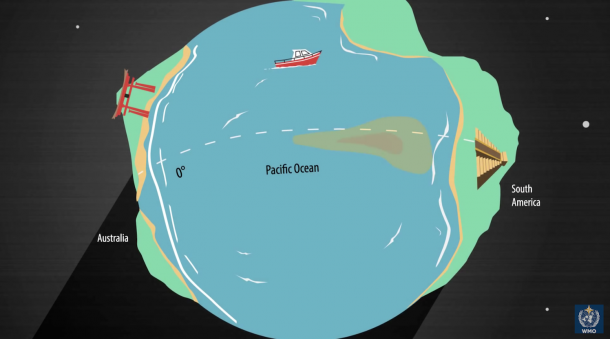 One of the strongest El Niño events ever measured is currently under way. It is already causing droughts and flooding in different parts of the world and affecting food production, water availability, public health and energy supplies. It is in this context that Columbia University, in Pallisades, United States of America (U.S.) hosted an international El Niño Conference to increase the scientific understanding of the current El Niño event and help boost resilience to anticipate global socioeconomic impacts on 17 and 18 November.

The last major El Niño in 1997–1998 wreaked widespread havoc and erased years of development gains. The world is much better prepared for this year’s event, but the socioeconomic shocks will still be profound. The Conference found that overall, since 1997–1998, models and forecasts are improving, countries and regions have greater capacities to generate and interpret forecasts, institutions are more adept at using climate/El Niño information for planning, preparedness and prevention, and there is greater awareness of El Niño, its impacts and what to do about it.

Going forward, the Conference identified needs for continued improvement in forecasts, for greater engagement from those that have experience and expertize with implementation of major climate services projects, for systematic support for full-suite implementation of relevant climate services, for more efforts in areas such as communication and visualization, and for comparative analysis of the impacts of the current event compared with the 1997–1998 baseline.

One of the key messages from the Conference was that the current El Nino is not the same as the 1997–1998 event, its effects on regional climates will not be the same and its socioeconomic impacts will be different. Though forecasts have improved and confidence in them increased, the lessening of socioeconomic impacts is highly dependent on better preparation and appropriate and timely actions at country and local levels.

Conference participants noted that the use of previous El Niño events as analogues to this and future El Niño events is increasingly untenable because the climate in which these events occur is changing. They underlined that in addition to climatic factors, the risks and outcomes related to this event will also be a product of many other significant changes in the socioeconomic context. This event is a factor in 2015 being the warmest year on record, but associated temperature spikes are nonetheless occurring in the context of a consistently upward global temperature trend. They further noted that El Niño occurrences need to be taken into account when assessing regional precipitation trends and dry conditions that exacerbate fires, which release more CO2 into the atmosphere.

The Conference was jointly organized by WMO, the International Research Institute for Climate and Society (IRI), part of Columbia University’s Earth Institute, the U.S. Agency for International Development (USAID) and the U.S. National Oceanic and Atmospheric Administration (NOAA).