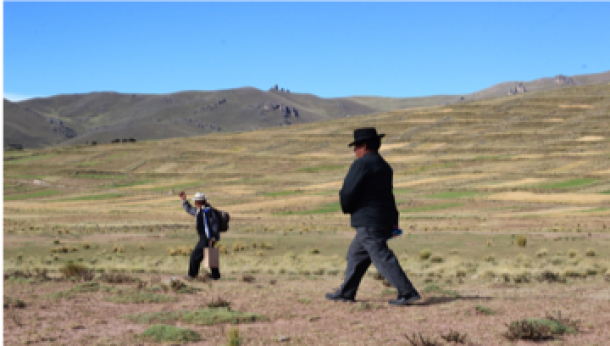 In the central Andean high plateau, farmers in Peru’s Puno region are taking part in a pilot experiment entitled Talleres Climáticos de Campo – TCC (Rural Climate Workshops), in which climate data and communications from the regional office of the National Meteorology and Hydrology Service of Peru (SENAMHI) are used to manage their risks.

Since November 2017, six TCC workshops have been conducted in the community of Churo López in the Ilave district, El Collao province, and in the Pusi district in the province of Huancané (Puno). Over 60 of the region’s livestock farmers and quinoa growers took part each month.

The aim of the TCCs is to strengthen the user interface and forge closer links with farmers. These open-forum experiments or workshops with users are strategies to create appropriate platforms for meteorological scientists, farmers and rural communities to exchange weather and climate knowledge.

The meeting spaces are backed by the first Estudio de Beneficios Socioeconómicos, un caso del cultivo de la quinua (A case study on the socio-economic benefits of quinoa growing), carried out in 2016 by SENAMHI and MeteoSwiss. One of the results of this study, in which over 700 quinoa producers participated, was a response to the demand for information on extreme events, including frosts, hailstorms and droughts, which affect crops and livestock in the high plateau.

Irma Aroapaza Clavitea, mayoress of the Villa López population centre in the district of Ilave, and Blas Huanca Mamami, the mayor of Pusi, expressed the need for training centres of this kind and for this new method of receiving information (weather warnings) by text message (SMS).

Claudio Ramos, the Climandes coordinator in Puno, presents a slide showing types of rainfall in the Quechua language; this effective PUI (integral urban project) platform responds to the needs of the population in the local language. Other topics addressed in the workshops were the El Niño phenomenon, frosts, hailstorms, cloud types, and the causes, occurrence and ways of preventing these extreme events.