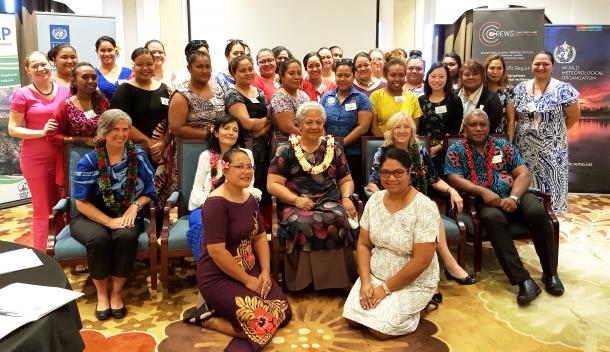 The Fifth Pacific Meteorology Council (PMC) – a gathering of the heads of Pacific Island meteorological and hydrological services that takes stock of activities in the region and sets priorities – issued a resounding call for the empowerment of women and girls in science across the region.  The Council meeting, in Samoa from 7 to 9 August, was preceded by a WMO Women Leadership workshop, a Communications Master Class and a CREWS* Pacific Small-Islands Developing States (SIDS) Project Steering Committee meeting.

Samoa Deputy Prime Minister and High-Chief Fiame Naomi Mata'afa sat amongst the women scientists at the Women Leadership event and urged them to be examples for the young girls in school and to take strength from each other by forming a network of Pacific Island women. The 35 women participants – hydrologists and meteorologists, mostly at the start of their careers but several more experienced and successful leaders – talked about overcoming the issues they face in their cultural context. At the end of the two-day event, the women, invigorated by shared experiences, enthusiastically embraced the challenge of empowering themselves and other in their respective organizations, families and communities.

The PMC itself saw an increase in the number of women participants. The Council aims to mainstream gender in the activities in the Pacific Meteorology Strategy Plan and to attract more women to participate and contribute to hydrometerological discussions and debates within the South West Pacific.

The Fifth PMC identified several regional priorities, which were also highlighted in the CREWS Project Steering Committee. These include: