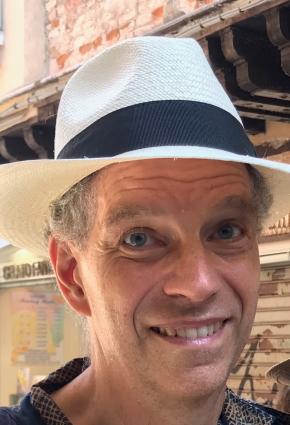 It is with deep sadness that I read the news of Geert Jan van Oldenborgh’s passing in September. Time magazine named one of the 100 most influential people of 2021, but it is as a mentor and source of inspiration that I will remember him. Many of Geert’s colleagues and co-workers can testify to his determination and scientific rigor. But for me, it was his ability to inspire others, especially young career scientists, that I will treasure.

I first met Geert at the University of Exeter, United Kingdom, in 2006. He was delivering a presentation on the “KNMI [ Royal Netherlands Meteorological Institute] Climate Explorer” – a web application developed  largely by him to provide access to complex climate datasets and to help investigate past, present and future climate fluctuations. It was outstanding, I was amazed by Geert’s ability to navigate complex climate science concept using this novel, freely available and user-friendly tool and particularly how it helped to communicate the many facets of our changing climate. I still remember the frenetic atmosphere that Geert’s seminar generated, turning many of the world’s top climate scientists into excited schoolboys with everyone envisaging ways to use the KNMI Climate Explorer to further address questions on climate change.

Over his career, Geert became a well-listened voice and beloved member of the climate science community. He was respected for his background in the predictability of the El Niño Southern Oscillation weather pattern in the Pacific regions, his in-depth understanding of the possible effects of climate change on extreme weather events and his well-grounded attitude. He contributed to several reports of the Intergovernmental Panel on Climate Change (IPCC) – yet another example of Geert’s constant eagerness to volunteer to use his professional and scientific expertise in service society.

The last interaction I had with Geert was during the development of the interactive atlas with regional information that complements the IPCC Sixth Assessment Report (AR6). He played an instrumental role despite the progression of his disease.  Geert, once again, was incredible in communicating his enthusiasm, creativity and scientific rigor to colleagues and co-workers. He was grounded, knowledgeable and full of gravitas – we will endeavor to remember the lessons he taught us while we maintain momentum on the work that was so dear to him.

Our thoughts go out to his family and loved ones.