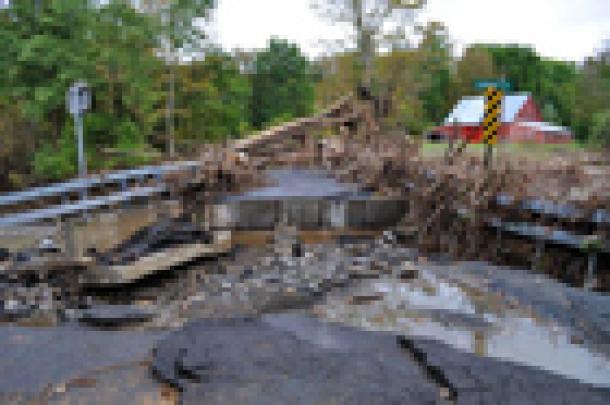 
WMO has developed a book which will be published in late 2011 by Springer-Verlag entitled, Institutional Partnership in Multi-Hazard Early Warning Systems: A compilation of seven national good practices and guiding principles.

It features cases from Bangladesh, China, Cuba, France, Germany, Japan and the United States of America, building on the expertise of WMO Members, UN and international partners and relevant national ministries. The book makes the case for greater integration of early warning systems in planning at all levels of society, building on lessons learned through international efforts.

Maryam Golnaraghi, WMO Chief of the Disaster Risk Reduction Programme, shares her insights based on developing the book.

Q. Are early warning systems having a greater impact in saving lives due to weather-related hazards?

A. Absolutely. Over the last five decades, economic losses have increased, but there has been a decrease in loss of life associated with hydrometeorological hazards. This success has been attributed to effective early warning systems, based on advancements in monitoring and forecasting of weather-related hazards, combined with effective communication and emergency preparedness at national and local levels in several countries with a history of high-impact weather-related hazards. The graph below outlines this trend very clearly.

Q. How are multi-hazard warning systems perceived internationally, and what have been the implications for national development of these systems?

A. Over the past decade, the international community has paid significant attention to early warning systems. Ten years after the adoption of the Yokohama Strategy for a Safer World: Guidelines for Natural Disaster Prevention, Preparedness and Mitigation (1994), in January 2005, just few weeks after the December 2004 tragic Indian Ocean tsunami, the United Nations International Strategy for Disaster Reduction convened the Second World Conference on Disaster Reduction in Kobe, Hyogo, Japan. During this conference, the “Hyogo Framework for Action 2005-2015: Building the Resilience of Nations and Communities to Disasters” was negotiated and adopted by 168 countries.

These international efforts have helped with shifting the paradigm for disaster risk management from post disaster response to a more comprehensive approach encompassing prevention and preparedness measures. The second high-priority area of the Hyogo declaration stresses the need for “identifying, assessing and monitoring disaster risks and enhancing early warning.” It notes that early warning systems must be an integral component of any nation’s disaster risk management strategy, enabling national governments and local communities to build community resilience before disasters strike.

A. Effective early warning systems are considered within a holistic approach and are comprised of four operational components.

For the system to be effective, these four components need to be coordinated across many agencies at national to community levels. Failure in one component or lack of coordination across them leads to failure of the whole system. Warning is a national responsibility. Thus, roles and responsibilities of various public- and private-sector stakeholders within the system must be reflected in the national to local regulatory frameworks, planning, budgetary, coordination and operational mechanisms.

Q. Taking these operational pre-requisities into account, what steps have been taken to improve coordination for early warning systems?

A. The trend has continued to build stronger coordination in various ways. There is now a greater emphasis on multi-hazard early warning systems. There is also continuing momentum to integrate early warning in a variety of sectors. Furthermore, as the responsibilities for emergency preparedness and response have been decentralized and shifted to local levels, it is important that there is alignment in the policies, planning, coordination, budgetary and operational mechanisms at national to local levels.

In 2006, the Global Survey of Early Warning Systems and the outcomes from the Third International Early Warning Conference concluded that early warning systems must be developed with a multi-hazard and multi-sectoral approach. Moreover, though progress had been made, remaining challenges needed to be addressed to better integrate early warning systems in disaster risk reduction strategies in all countries, particularly those with the least resources. The 2006 Global Early Warning Survey Report cited challenges in legislative, financial, organizational, technical, operational, training and capacity building sectors. In addition, the early warning system assessment carried out by WMO in collaboration with 18 other United Nations agencies, as input to the 2009 UN-ISDR Global Assessment Report on Disaster Reduction, indicated similar results.

It became clear that governments at national to local levels and various agencies could benefit from experiences of other governments that had successfully implemented effective early warning systems. Participants in many international forums voiced a need to document good practices and engage national agencies and authorities to share practical cases, lessons learned and principles that led to their success.

A. In 2007, the 15th World Meteorological Congress requested that WMO document good practices, in partnership with its Member States and UN partners. WMO cooperated with other UN and international partners as well as its Members through consultations with experts involved in national and local components of early warning systems, by conducting two international symposiums and several regional and national events. Through these consultations, WMO developed a systematic process to document good practices, including criteria for and examples of good practices around the world.

The two primary assumptions that guided this work were that protection of citizens’ lives is a key responsibility of the government from national to local levels, and that issuing authoritative warnings is a national responsibility. A detailed template to document good practices was developed through a consultation process that has engaged leading experts in early warning systems, providing guidelines for systematic documentation of the various aspects of early warning systems within a holistic point of view.

Q. Which cases have you developed?

Q. Have common success factors emerged in your analysis of the cases?

A. We found ten common principles that have led to the success of these systems, irrespective of the political, social, institutional, and economic factors in each country.

The lessons from these good practices can be adapted by countries that require multi-hazard risk management. The specific design and implementation of strategies vary according to the specific history, culture, socio-economic conditions, institutional structure, capacity and available resources for sustainability of the system.