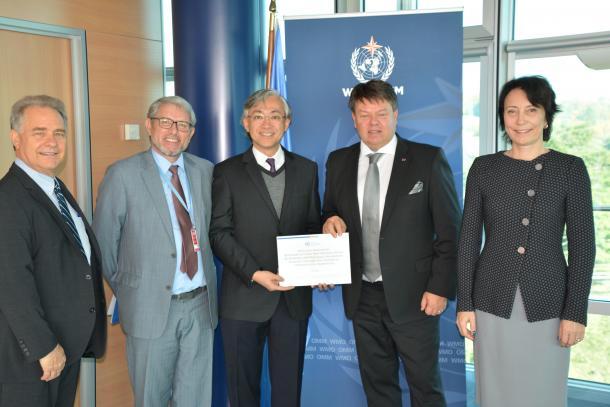 WMO Secretary-General Petteri Taalas awarded a certificate to the Hong Kong Observatory (HKO) on 18 October officially accrediting it as a WMO Centennial Observing Station. The certificate was presented to HKO Director Shun Chi-ming, at WMO headquarters in Geneva.

In order to promote the rescue, preservation and continuation of long-term climate records, in 2016 WMO started providing formal recognition to stations nominated by governments as Centennial Observing Stations. Taken together as an international network, these stations are able to tell a unique story of recent climate history.

The Hong Kong Observatory has been collecting regular meteorological observations at its headquarters since 1884, documenting how the climate has varied over the years due to both man-made climate change and the effects of local urbanization. These data are an invaluable source of climate information for Hong Kong and the world.

Sixty stations around the world have been accredited. The full list is available at public.wmo.int/en/our-mandate/what-we-do/observations/long-term-observing-stations