The Hybridization of Sandy 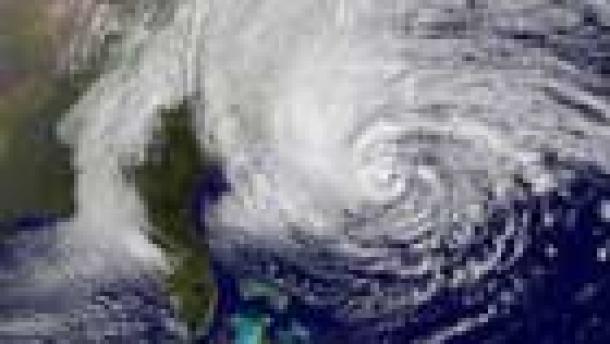 The Hybridization of Sandy

Ever so often, a quiet corner of research suddenly grabs the spotlight.

Such was the case with the Category 1 Atlantic hurricane Sandy that killed dozens and caused major destruction a bit earlier in the Carribean before developing further strength and wreaking tens of billions of dollars in damage and taking scores of lives in the eastern United States. While there have been hybrid storms before, Sandy was a creation distinct in meteorological annals, as it pulled together a variety of familiar ingredients in a unique way. Sandy could be the storm that launches a thousand dissertations – or at least a few – and some of its noteworthy aspects have implications for hurricane warning in general.

When a Hurricane Shapeshifts

“Extratropical transition” is the formal description for what happened in the 12 to 24 hours before Sandy made landfall near Atlantic City on Monday evening, 29 October. “Extratropical” means “outside the tropics,” so technically speaking it would apply to any cyclone (low-pressure centre) located in the mid-latitudes or polar regions. But there’s a more basic distinction used by meteorologists: whether a low pressure system is warm-cored or cold-cored.

A hallmark of tropical cyclones – known as hurricanes, typhoons, or cyclones in various parts of the world – is that their circulations revolve around a core of warm air. Tropical cyclones draw energy from oceanic heat and moisture, and they thrive when the surrounding air is uniformly warm and humid and upper-level winds steering the storm are relatively weak. In contrast, an extratropical low is typically positioned at or near the intersection of a cold front and warm front. Such a low is helped rather than hindered by temperature and moisture contrasts between the fronts and the accompanying strong winds of the polar jet stream.

Here are three of the routes that warm- and cold-core systems can take as they evolve:

It is not unusual for a tropical cyclone to shift from warm-core to cold-core. In an average year, one or more hurricanes will evolve into extratropical storms in a fairly straightforward manner as they move into the North Atlantic. As colder, drier air intrudes into the warm core, the storm typically loses symmetry and begins tilting toward the coldest upper-level air.

It is also possible for an extratropical cyclone to develop what is known as a warm seclusion. In this case, a pocket of warm, moist air is drawn into the cold-core circulation, then pinched off through a complicated set of dynamics involving air pulled down from the stratosphere. This is dubbed the Shapiro-Keyser process, after veteran researchers Mel Shapiro (now at NCAR) and Daniel Keyser (University of Albany, State University of New York). Some of the Atlantic’s most intense storms of any type have emerged from warm seclusions. These are most common in winter over the far North Atlantic, but rarely do they move onto the mid-Atlantic coast, especially in mid-autumn.

Once in a while, an extratropical cyclone will get a boost of energy by absorbing the remnants of a hurricane. Well east of New England, the iconic “perfect storm” of October 1991 was fueled by heat and moisture from the late Hurricane Grace. While it never moved ashore, this great storm still pushed destructive surf into much of the U.S. East Coast.

Meteorologists are still parsing the maps, but it appears that Sandy may have incorporated elements from all three of the above processes. While Sandy was still a hurricane, the storm’s outer edges began to reveal some aspects of an extratropical cyclone, with an enormous zone of strong surface wind and “a great chimney of upper-level outflow,” as Shapiro puts it (see satellite image). The storm’s warm core briefly intensified about a day before landfall. 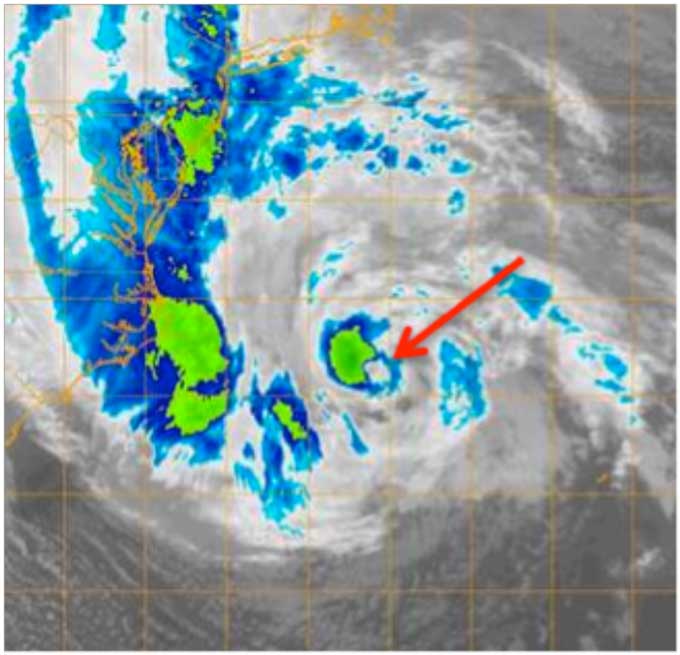 At 0245 UTC on Monday, October 29—about a day before Sandy struck New Jersey—the storm began carving out a thin eyewall (indicated by red arrow), a sign of hurricane intensification, even as the outer part of the storm increasingly resembled an extratropical cyclone. (GOES-13 image courtesy U.S. Naval Research Laboratory.)

Then, a few hours before landfall, Sandy began a sharp curve toward the west, moving toward the heart of the approaching mid-latitude trough of low pressure. In Shapiro’s view, this marked an apparent warm seclusion trying to take place on top of the storm’s fast-decaying warm core. Asked how often he’s seen a storm like Sandy, Shapiro responded, “Never.”

The one that may come closest in Shapiro’s view is the “Long Island Express” hurricane of 1938, which killed hundreds of New Englanders as it slammed ashore virtually without warning. The 1938 storm reportedly raced northwards at speeds of close to 115 km/h, making it the fastest-moving hurricane on record, and hooked northwest after landfall. While not as much of a speed demon, Sandy did accelerate to a forward motion of nearly 50 km/h as it curved west and approached New Jersey. Upper-air observations from the 1930s are sparse, however, so it might not be possible to pin down the commonalities between the two events.

At 0245 UTC on Monday, October 29—about a day before Sandy struck New Jersey—the storm began carving out a thin eyewall (indicated by red arrow), a sign of hurricane intensification, even as the outer part of the storm increasingly resembled an extratropical cyclone. (GOES-13 image courtesy U.S. Naval Research Laboratory.)

Two storms in one?

Sandy’s vast wind field provides more evidence for the warm-within-cold theory. Along with a small central core of winds near hurricane force, focused on Sandy’s south side, there was a second maximum of high wind well to the north. It pounded portions of New England with wind gusts as high as 140 km/h in Rhode Island. This outer wind band later moved into Long Island and New York City.

This dual wind structure is not a common occurrence with hurricanes. Fortunately, computer models predicted the unusual outer band of high wind more than a day ahead of time. And upper-air observations caught its development several thousand feet above ground a few hours before the winds mixed down to the surface. As a result, the National Weather Service provided a specific “nowcast,” putting people in the New York area – especially those in skyscrapers – on alert that dangerous hurricane-force gusts could occur in a window of several hours on Monday evening. Gusts reached 145 km/h at Islip, in central Long Island, and 127 km/h at John F. Kennedy International Airport, in Queens.

There’s still much to digest about the physics of this remarkable weather event, not to mention the host of societal issues it has raised. What is heartening to researchers is that computer models, by and large, predicted many of Sandy’s most unusual features days ahead of time. That gave forecasters confidence in predicting unprecedented impacts to the most densely populated part of the nation, regardless of whether Sandy was dubbed a hurricane, an extratropical storm, a hybrid, or – in the label that now seems to be winning out – a “superstorm.”