IPCC agrees on the outline of two new reports 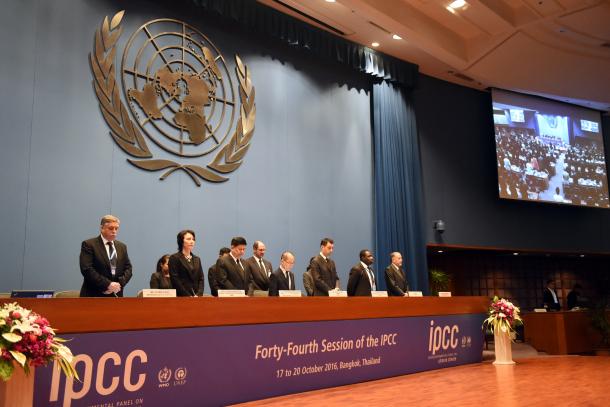 IPCC agrees on the outline of two new reports

During the 44th Session of the Intergovernmental Panel on Climate Change (IPCC) held in Bangkok, Thailand, from 17 to 20 October, the IPCC agreed on the outline of two new reports that will help governments implement the Paris Agreement on climate change.

The first report, Global Warming of 1.5ºC, an IPCC special report on the impacts of global warming of 1.5ºC above pre-industrial levels and related global greenhouse gas emission pathways, in the context of strengthening the global response to the threat of climate change, sustainable development, and efforts to eradicate poverty will be released in 2018. It was requested by governments at COP21 in Paris in December 2015.

The second report, Refinement to the 2006 IPCC Guidelines for National Greenhouse Gas Inventories, will be finalized in 2019. It will be prepared by the IPCC Task Force on National Greenhouse Gas Inventories in order to provide governments with updated knowledge on how to estimate the level of their greenhouse gas emissions and removals – critical information for tracking progress on meeting the Paris Agreement goals.

The decision on the outlines, which had been drafted by scoping meetings in August, paved the way for the IPCC to launch a call for nominations in October for authors for both reports.

The agreed outlines and the call for nomination of authors for the reports are available at: www.ipcc.ch