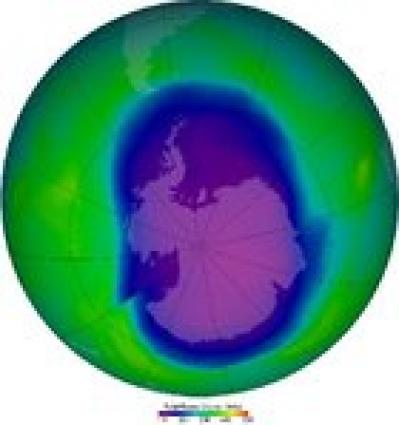 In 2012, the Antarctic ozone hole was less severe than in most recent years, reaching its maximum daily size at 21.1 million km2, the second smallest in the last 20 years.

On 1 October it reached a minimum daily average of 124 Dobson Units (DU), the second highest value in two decades. Two factors contributed to this development. First, stratospheric temperatures over the South Pole region were somewhat warmer than those seen in recent years. This led to a smaller extent of polar stratospheric clouds in comparison with most recent years, although the Antarctic stratosphere was even warmer in 2010. The relatively mild stratospheric temperatures of 2012 would normally have led to a moderately weak ozone hole, probably somewhere between the ozone holes of 2010 (relatively weak) and 2011 (rather normal).

Second, the 2012 Antarctic stratosphere was unusually active, leading to the transport of ozone-rich air from neighbouring latitudes into the South Pole region. This ozone-rich air acted like a lid on top of the ozone-depleted air masses underneath, leading to low values for the area of the ozone hole (that is, the area of the region where total ozone is less than 220 DU). These low values occurred despite the fact that ozone depletion had taken place more or less as normal in the 14–20 km altitude range.