Madagascar, first developing country to use the German Agrometeorological Model 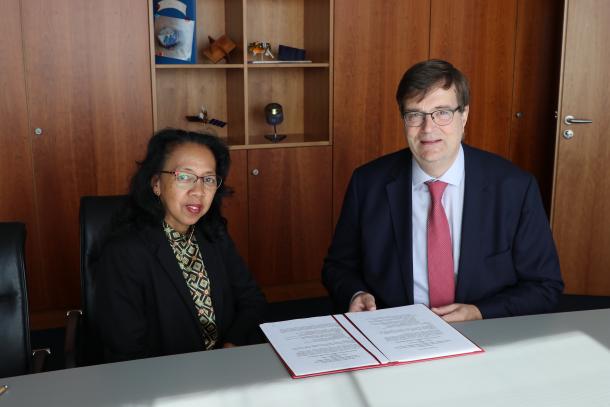 Madagascar, first developing country to use the German Agrometeorological Model

Agriculture plays an important role in the national economy of Madagascar as well as in the household revenues and food security of a large part of its population. Thus, to improve the accuracy of its agrometeorological products, Madagascar’s Direction Générale de la Météorologie (National Meteorological Service, DGM) launched a five-year collaboration in 2017 with the Deutsche Gesellschaft für Internationale Zusammenarbeit (German Agency for International Cooperation, GIZ) and the Deutscher Wetterdienst (DWD) for the Adaptation of Agricultural Value Chains to Climate Change (PrAda) project. As a result, Madagascar has become the first developing country to adapt the German AMBAV_global agrometeorological model.

PrAda aims to enhance the quality and accuracy of climate services and to thus increase acceptance and use of agrometeorological products among agricultural stakeholders. AMBAV_global – an agrometeorological model developed by DWD – is an essential part of the project. MBAV_global determines two key parameters:

Both parameters are valuable in agriculture to reduce the risk of yield losses due to weather and climate, to optimize the use of resources and to adapt to increasing climate variability and change.

Now, three years into PrAda, AMBAV_global had been adapted to the limited availability of meteorological data in Madagascar and calibrated for five crops: peanut, ginger, millet/sorghum, castor oil plant and onion. Several experts from DGM and other national research institutions had also been trained to use and improve the model. Now, DGM is working on optimizing both the calibrations and the operational use of AMBAV_global to their seasonal crop calendars. They have also found that they could improve some of their other information products using the model.

As agreed in a Memorandum of Understanding between DGM and DWD, experts from both services will continue to collaborate on further developments to AMBAV_global and its applications for Madagascar.

PrAda is implemented by GIZ on behalf of the German Federal Ministry for Economic Cooperation and Development (BMZ). The five-year project (2017-2022) is co-financed by the European Union as part of the “Programme to support the Financing of Agriculture and Inclusive Value Chains in the South of Madagascar” (AFAFI Sud).

Further information about the PrAda project can be found here.