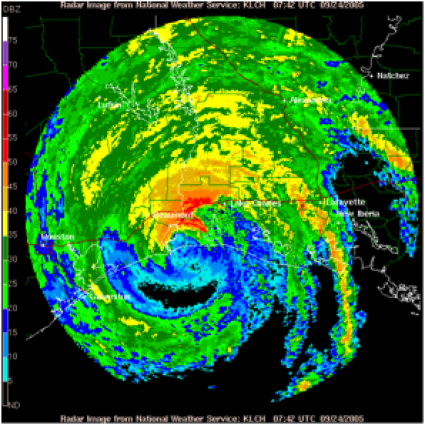 At the next World Radiocommunication Conference (WRC), to be held from 2 to 27 November, a number of studies will be presented on the use of various radio frequency bands, some minimizing the importance of the 2.7–2.9 GigaHertz (GHz) frequency to meteorology. WMO is concerned about this as the use of the 2.7–2.9 GHz frequency (S-band) by meteorological radars is critical for weather monitoring and prediction applications.

Weather radars play a crucial role – the information they provide permits meteorologists to issue early warnings and alerts of severe or extreme weather events, thanks to which innumerable human lives are saved and damages to property are limited.

Weather radars can provide information on precipitation intensities and wind velocities, providing a 3-dimensional view inside storms and allowing detailed location and characterization of associated hazardous weather. Information from weather radars are used to predict the formation of typhoons, hurricanes, tornadoes and other severe weather events and to follow their course. They also are used in predicting the potential for flash floods, high winds and lightning potential.

There are three frequency bands commonly used for weather radars:

• S-band (2700–2900 MHz), deployed mostly in tropical and temperate climate areas, for example, in areas where hurricanes, tornadoes, large hail and monsoon or heavy rain are common;

The WMO weather radar database has metadata for 835 of the estimated 1 500 operational weather radars in the world. Of these, approximately 40% (335) are S-band and 53% (446) are C-band. NEXRAD in the United States of America is the largest S-band network with 160 radars. The network of China, CINRAD, consists of 158 radars and is a mixture of C-band and S-band radars (not yet available in the WMO database). Russia is planning to implement a network of similar size by 2020.

All meteorological radars operate by transmitting radio signals and measuring the returned signal. Only a tiny fraction of emitted energy is reflected or back-scattered by atmospheric constituents such as raindrops; therefore, weather radar receivers are very sensitive instruments. Any disturbance within the same frequency band reduces or destroys the usability of their measurements.

There is documented widespread use around the world of S-band and other weather radar in severe weather monitoring, prediction and warning applications – which save lives and property. It is of paramount importance to preserve the 2.7–2.9 GHz frequency band for this critical meteorological purpose.
The International Telecommunication Union (ITU), the United Nations agency that organizes WRC every three to four years, is responsible for the revision of the Radio Regulations, the use of the radio-frequency spectrum and satellite orbits. (For more information on the S-band, see ITU report (2008) Use of Radio Spectrum for Meteorology: Weather, Water and Climate Monitoring and Prediction.)

WMO encourages its Members to visit the radar database and to inform the Organization if any of their operational weather radars are not listed. 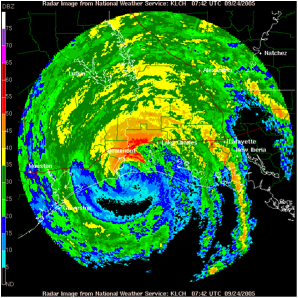 An S-band radar image from Lake Charles Regional Airport (Louisiana, USA), showing the structure and the intensity of rain associated with Hurricane Rita on 24 September 2006