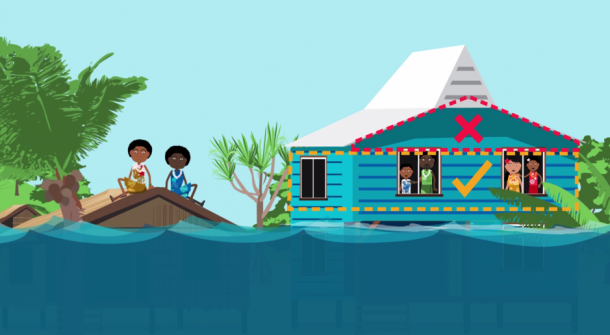 Coastal flooding annually costs billions of dollars worldwide and causes untold loss of property and life. This is often due to many people not knowing what safety measures they should take in the case of a flood warning. In response, WMO is working to raise awareness and has released a new engaging and informative animated video to specifically support communities in the Pacific Islands. These communities are particularly vulnerable to deadly coastal flooding, including from storm surges during cyclonic or storm events, wind waves and swell, and flooding from coastal rivers.

It is being made freely available across the Pacific Islands, and is expected to be aired on television, in schools, in cinema previews and at community events. It will also be translated, where possible, into local languages to enable wider use.

The production of the video was endorsed by Regional Association V (South-West Pacific) in Resolution 5 of its Seventeenth Session in October 2018. It was made possible with funding from the Korea Meteorological Administration and the Canada CREWS project. Similar animated videos are planned that will be tailored to communities in South-East Asia and Africa.

The video may be viewed on the WMO YouTube channel.

Also released in November by WMO, is an informative animated video about the Flash Flood Guidance System.