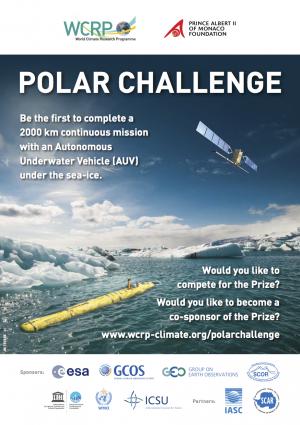 During the Arctic Science Summit Week, 12–18 March in the United States of America (US), the World Climate Research Programme (WCRP) and the Prince Albert II of Monaco Foundation, in affiliation with the Association of Hydro-Meteorological Equipment Industry (HMEI) as an industry partner, launched a Polar Challenge to reward a 2 000 km data-collection mission under the sea ice in the Arctic or Antarctic with an Autonomous Underwater Vehicle (AUV). Their aim is to stimulate the development of a much-needed monitoring tool for the Polar regions to complement satellite observations, and ultimately expand scientific research capabilities and climate services in both the Arctic and Antarctic.

“Polar observations are vital in order to improve our understanding of the frozen cryosphere, which is a key indicator of environmental change and which, in turn, has a major influence on the global climate,” emphasized WCRP Director David Carlson. “With the Polar Challenge, we hope to open new horizons in under-ice navigation, endurance and environmental monitoring,” said WCRP Senior Scientist Michel Rixen.

WCRP and the Prince Albert II of Monaco Foundation hope the competition will promote technological innovation towards a future cost-effective, autonomous and scalable observing network for ice-covered ocean regions based on a fleet of such platforms, similar to what ARGO, a global network of more than 3 500 free-drifting floats, has accomplished for the open ocean.

The Polar Challenge will offer the potential to develop new data sets of sea-ice and under-ice properties far into unexplored territories, revolutionizing our knowledge of heat fluxes and storage, fresh water exchanges, carbon sequestration and ocean acidification in those regions.

For further details, including competition rules and registration visit the website.