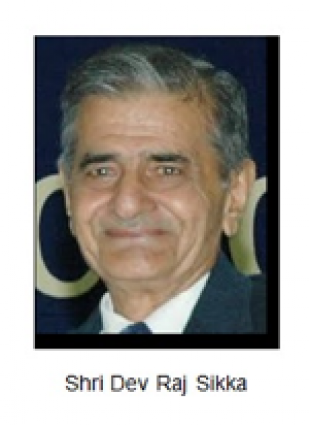 Dev Raj Sikka was a monsoon polymath. His auspicious and passionate affair with the Indian monsoon began in 1954, when he joined the India Meteorological Department (IMD), and ceased only with the end of his life on 18 March 2017. He was born in 1932, and spent his early childhood in Jhang Mighiana, in then undivided India, now Pakistan. From his earliest days in primary school, Sikka was an outstanding scholar and eventually, his enquiring mind led him to the works of the pioneers of Monsoon Meteorology: Blanford, Elliot and Walker. To these works, Sikka merged the later contributions of Riehl, Malkus, Ananthakrishnan, Bjerknes and Charneyto generate our current understanding of monsoon physics.

Sikka’s contributions were rooted in his profound urge to delve deeply into the monsoon system.  He employed traditional and space-borne observations within the context of well-conceived theoretical frameworks. This ability is exemplified by his discovery of coherent northward propagations of cloud-bands generated over the equatorial Indian Ocean at intervals of 2-6 weeks, throughout the summer monsoon season, that has led to improved forecasting of the important rainy spells (and mini-droughts) across India. Sikka elucidated the link between the Indian summer monsoon rainfall and ENSO (with a high propensity of droughts during El Nino).  Even today, the ENSO-monsoon relationship is the basis of monsoon prediction by most of the state-of art dynamical models.

Sikka was a proponent of dedicated field experiments to pose and test hypotheses. He was an active participantin all the major regional experiments, including the International Indian Ocean Expedition (IIOE) during 1963-65 where his intimate knowledge of monsoon meteorology profoundly influenced the success of the Expedition. He was a keystone scientist in Monsoon Experiment (MONEX), a major component of First Global Atmospheric Research Program (GARP) Global Experiment {FGGE} in 1979. He played a major role in planning and executingthe Indian Climate Research Programme with field experiments over the Bay of Bengal, Arabian Sea and the Indian monsoon zone.

Sikka’s legacy is deep and long-lasting. He joined the Indian Institute of Tropical Meteorology (IITM) in December 1962 and became its director in 1986. For over four decades, Sikka carried out and actively nurtured high quality research and promoted atmospheric and oceanic sciences across the country. He served on several national committees, was an advisor to the Ministry of Earth Sciences and activelyparticipated in several international programmes including Tropical Ocean Global Atmosphere (TOGA) and the South Asian Climate Outlook Forum (SASCOF).

He was elected a Fellow of the Indian Academy of Sciences in 1984, obtained the first Lifetime Achievement Award  in Atmospheric Science and Technology by the Ministry of Earth Sciences in 2007, the Sir Gilbert Thomas Walker Gold Medal in 2012 and Lifetime Achievement Award in 2017 by the India Meteorological Society(IMS). He is survived by two daughters and a granddaughter and an international community of grateful scientists.