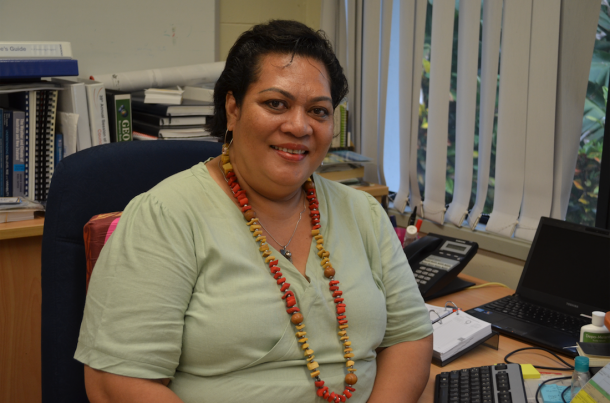 Dr Netatua (Neta) Pelesikoti, a respected environmental scientist, passed away suddenly on 11 November 2020 in Nuku’alofa, Tonga.  Described as a true Pacific Warrior and “Queen of Disaster Risk Reduction”, Dr Pelesikoti was visionary, inspirational and dedicated to building the resilience of all Pacific countries. She is also deeply respected for her excellent leadership and for contributing immensely to the WMO community in the critical fields of climate change and its impact on communities, especially those of Small Island Developing States (SIDS).

An experienced scientist and manager with an extensive career in driving resilience and sustainable development in the Pacific, Dr Pelesikoti led many important initiatives. Her contributions to environmental science and engagement in this most vulnerable region cannot be underestimated and will have a long-lasting influence. Her contribution to the work of WMO, more recently as a member of the WMO Scientific Advisory Panel has been of enormous value.

Dr Pelesikoti studied Geography and Economics at the University of the South Pacific, followed by a Master's Degree in Environmental System Analysis from the International Institute for Aerospace Survey and Earth Science, Netherlands. In 2003, she received her Ph.D. in Environmental Science from the University of Wollongong, Australia, in Sustainable Coastal Resource Monitoring and Assessment focusing on coastal water quality, coral reef and seagrass.

A coastal ecologist by profession, she began her career as an environmental technical officer in Tonga. She then moved on to work on policy and management at the national level, serving as an advisor at the South Pacific Applied Geoscience Commission (SOPAC), now called the Applied Geoscience Division of the Pacific Community.

In 2009, Dr Pelesikoti began her career at the Secretariat of the Pacific Regional Environment Programme (SPREP) as a Programme Manager for the Pacific Futures Program where she oversaw all projects on climate change, waste management and pollution control, environmental monitoring and governance, including the Global Environment Facility (GEF). She was successful in negotiating that SPREP become the Pacific Finance Hub for the Commonweath Financial Hubs which greatly strengthened SPREP’s capacity in providing climate finance advice to Members.

In 2012, she was promoted to Director of the Climate Change Division and managed many initiatives related to climate change, disaster risk reduction, capacity building and sustainable and resilient development in the Pacific SIDS. These include building capacity of national governments and stakeholders in project conceptualization, prioritization and preparation covering both adaptations and mitigations. She also led in supporting countries to develop national resilience frameworks and country adaptation programmes.

Dr Pelesikoti became the first Pacific island woman to be a lead author of an Intergovernmental Panel on Climate Change (IPCC) Report – 5th IPCC Assessment Report.  She also championed inclusivity by developing regional and national guidelines for mainstreaming gender in a social and environmental context in project development, implementation and monitoring and evaluation.

During her time at SPREP, the Pacific Ministerial Council on Meteorology was established. It has become a significant force for representation of the Pacific climate vulnerability to the global community, and was considered a major achievement.

In 2017, at the end of her term at the Pacific Regional Environment Programme, she returned to Tonga where she worked freelance as a climate change and disaster risk reduction specialist. In 2019, Dr Pelesikoti was admitted to the WMO Scientific Advisory Panel, an elite group of 15 scientists worldwide who are experts on weather, climate and water. That same year, the Pacific Meteorological Council awarded her “The PMC Lifetime Award” in recognition of her key role in the establishment of the Pacific Met Council, the Pacific Meteorological Desk Partnership, Pacific Climate Outlook Forum and the Pacific Ministerial Meeting on Meteorology (Tonga, 2015). In September 2020, she served as the Deputy Chair of the Tonga Cable Ltd. Board.

Dr Pelesikoti is a great loss to Tonga, the Pacific and the WMO Community and will be missed greatly by her family, friends and colleagues.