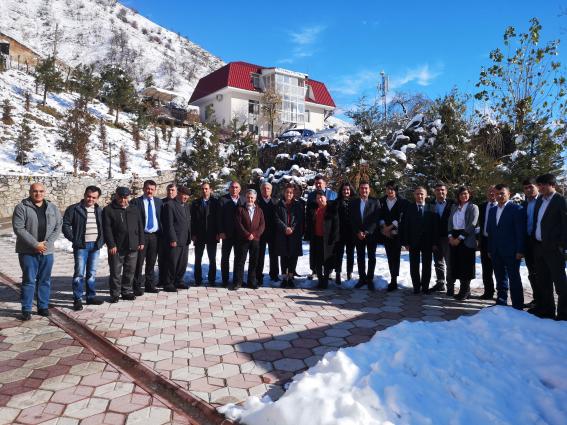 Strengthened agrometeorological services and early warning systems are needed to provide farmers and rural dwellers in Tajikistan with the capacity to prepare for and adapt to climate changes that will impact agricultural production.

With this in mind, a two-day workshop was held to advance the scaling up of the country’s pilot agrometeorological system, which is led by the Food and Agriculture Organization of the United Nations and funded by the European Union. The event took place from 23 to 24 November in Khoja Obi Garm, Tajikistan with the participation of the key stakeholders involved in the collection and production of agrometeorological services. These included representatives of Tajikistan’s State Agency of Hydrometeorology, State Agency of Plant Protection and Chemicalization, Committee for Environmental Protection, national NGOs and farmer organizations.

They validated the outcomes of the pilot programme, which was launched earlier this year, and paved the way for scaling up the system to cover more agricultural regions in the country. They also identified practical and feasible approaches to boost the efficiency and effectiveness of the agrometeorological sector with timely and accurate agro-climate information.

The event marked a milestone in forging the public-public and public-private dialogue required to move from the pilot stage to building a full agrometeorological system in the country. It also achieved the first steps in forming agreements between national institutions and non-governmental organizations for the future development of the system in Tajikistan.

WMO welcomed the opportunity to take part in the FAO-hosted event and looks forward to continuing to expand the successful collaboration with FAO in areas like drought management, crop models and training, among others.