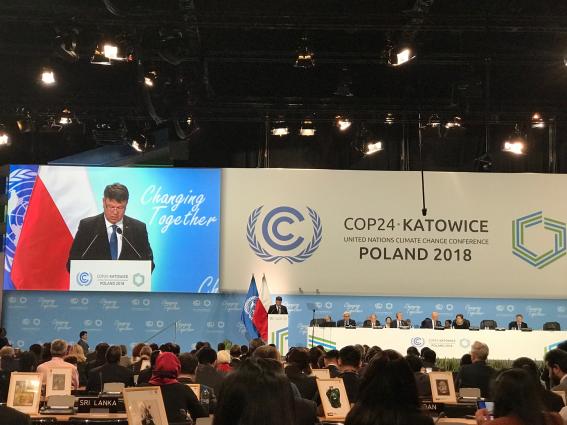 Climate science took centre stage at the 24th annual Conference of the Parties to the UN Framework Convention on Climate Change (COP24) negotiations from 1 to 14 December in Katowice, Poland, with repeated calls for action to rein in global temperature increases or risk irreversible impacts.

“To waste this opportunity in Katowice would compromise our last best chance to stop runaway climate change,” said UN Secretary-General, António Guterres, “It would not only be immoral, it would be suicidal. This may sound like a dramatic appeal, but it is exactly this: a dramatic appeal,” he told delegates. “The IPCC Special Report is a stark acknowledgment of what the consequences of global warming beyond 1.5 °C will mean for billions of people around the world, especially those who call small island states home.”

Hoesung Lee was joined at the high-level session by WMO Secretary-General Petteri Taalas, who presented the latest findings on greenhouse gases and the state of the climate to assembled ministers and delegates. "We are expecting at 2% − 4% increase in global CO2 emissions this year. If we are are serious about the Paris Agreement, we need to see different numbers,” said Mr Taalas. The WMO Greenhouse Gas Bulletin reported that CO2 concentrations in 2017 hit new records, levels not seen in at least 3 million years. The Global Carbon Budget, published by an international consortium of researchers during COP24, said that emissions are expected to rise 2% − 4% this year.

Underlining the pace of climate change, the National Oceanic and Atmospheric Administration (NOAA) published a new Arctic Report Card on 10 December. It said that the Arctic continues to warm at twice the rate of the rest of the globe, and may be contributing to extreme weather events in the northern hemisphere. Caribou and reindeer populations across the Arctic tundra have declined 56% from 4.7 million to 2.1 million animals over the last two decades, due to a loss of forage food, parasites, hunting, drought and climate warming. Sea ice remained younger, thinner and covered less area than in the past. Ice which is older than 4 years now makes up less than one percent of the ice pack.