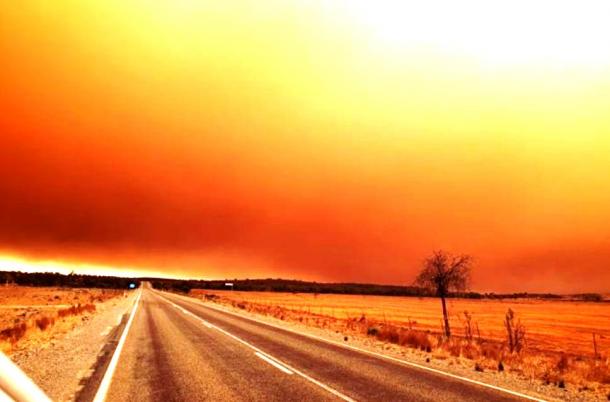 The Republic Hydrometeorological Service of Serbia (RHMSS), a partner in the WMO Sand and Dust Storm Warning Advisory and Assessment System (SDS-WAS), has numerically simulated an Australian dust storm event using DREAM dust model. The simulation was part of WMO SDS-WAS initiative to include dust impacts to high latitudes in its research agenda.

The hottest, driest year on record in Australia – 2019 – triggered a series of major dust storms in the first weeks of 2020. The storms formed over dust sources in the central part of the sub-continent. The Australian Bureau of Meteorology issued a warning for one of the storms on 22 January, predicting "damaging winds of 60-70km/h with gusts of 90km/h" associated with thick raised dust. Later that day, a dust storm moved through New South Wales over parts of Victoria to arrive in Melbourne. The air became orange and visibility dropped significantly, it became almost impossible to drive. After two days, the dust pattern moved southward to cover a large part of Antarctica’s Eastern coast.

"When we noticed the extreme character of the storm, we set-up the model with 8 km horizontal resolution over Australia, finer than usual, to explore the capability of high-resolution models to predict such extreme dust storms,” said Slobodan Nickovic, Chair of the WMO SDS-WAS Regional Node for Northern Africa, Middle East and Europe, who conducted the experiment. “When we understood that the dust was moving fast southward, we did the simulation for the same case but with the global model version. It showed that the dust would arrive on 24 January in Antarctica and cover a large sector of the eastern continent coastline.” The model also predicted that a fraction of dust would have the role of ice nuclei in the formation of cold clouds (Nickovic et al, 2016). The simulated ice cloud formed by dust compared well with the NASA observation of the ice cloud phase over the Antarctic region.

Accelerated warming in the Arctic and Antarctica is determined by numerous processes in which aerosol plays a significant role at high latitudes. Dust in particular changes snow/ice albedo and melting rates, affects the marine productivity, alters microbial dynamics in glaciers and causes indirect (cloud formation) and direct (solar radiation) effects. The numerical experiment conducted in Serbia demonstrates the potential of modeling and observational facilities to better understand why climate change is happening so fast in the high latitudes.