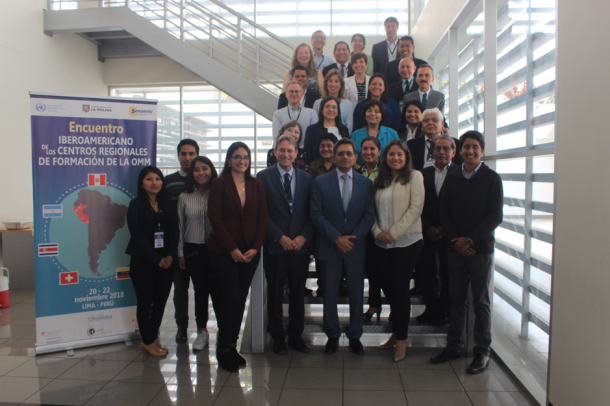 The Regional Training Centre (RTC) Directors of Ibero-American countries met in Lima, Peru, from 20 to 23 November to develop plans for increased collaboration. This was the first RTC meeting precipitated by the budding WMO Global Campus initiative. It was followed by a meeting in Santiago, Chile, with the Permanent Representatives (PRs) of the RTC hosting countries to complete the planning. The meetings, supported by the National Meteorology and Hydrology Service of Peru (SEHAMHI), National Agrarian University – La Molina (UNALM), the State Meteorological Agency of Spain (AEMET), and the CLIMANDES Project, included RTC representatives from 10 institutions, as well as PRs from Argentina, Brazil, Costa Rica, Peru, Spain and Venezuela.

Regional training needs were narrowed down to four high priorities, then smaller teams developed initial training plans for each of the four areas:

At the meeting in Santiago, these project plans were presented to the PRs, refined and approved, and funding sources were identified.

A Declaration of the Permanent Representative of Ibero-American Countries with WMO RTCs, which was begun in Peru and describes intended actions to further improve their collaboration and development, was reviewed, revised and signed by the PRs. The meeting established a model that might benefit other WMO regions and subregions.