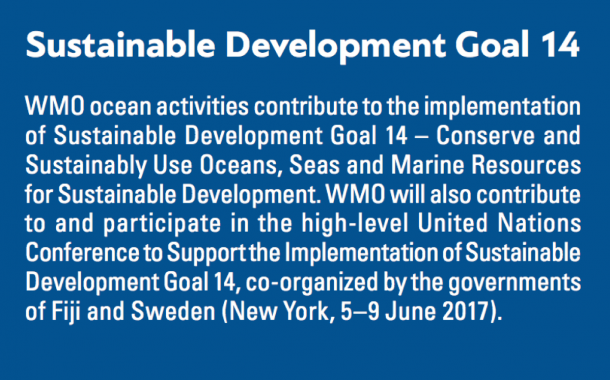 The ocean carries more than 90% of world trade and sustains the 40% of humanity that lives within 100 km of its coasts. Every year the United Nations General Assembly reinforces the message that oceans, seas and coastal areas are critical to sustaining Earth’s ecosystems and are a vehicle for cooperation, peace and security by adopting a resolution, “Oceans and the law of the sea,” that provides a comprehensive appraisal of ocean a airs. The December 2016 resolution acknowledges the significant contribution of WMO to ocean affairs.

The ocean is a major driver of weather, climate and the global economy. WMO coordinates the worldwide e orts to produce and disseminate increasingly accurate and timely weather forecast and alerts for both land and sea. The Organization fosters research and scientific progress toward better monitoring of the ocean, better models for how the ocean affects the atmosphere and toward delivering better marine services to support coastal management and safety at sea. WMO also collaborates with the International Maritime Organization (IMO) to produce enhanced navigational warning services that are critical for the safety of ships and lives at sea. The meteorological data on which such warnings are based are also used to optimize navigation routes.

Ocean observations, research and services are of paramount importance to our understanding of climate change and to the sustainable management of the ocean. WMO Global Atmosphere Watch findings indicate that greenhouse gas concentrations are increasing. This is impacting the carbon budget of the ocean, causing ocean acidification that is putting marine ecosystems at risk. Ocean observing programmes such as the Global Ocean Observing System (GOOS), jointly-sponsored by WMO and UNESCO Intergovernmental Oceanographic Commission (IOC), increase scientific understanding of the ocean-atmosphere interface. The role of such programmes in monitoring and forecasting climate change as well as in the operation of tsunami warning systems cannot be overstated.

Greater collaboration is needed between organizations and institutions that address ocean observations, research and services. The UN Resolution specifically encourages Member States to address damage to ocean data buoys deployed and operated in accordance with international law through cooperation with relevant organizations, including WMO and UNESCO IOC.