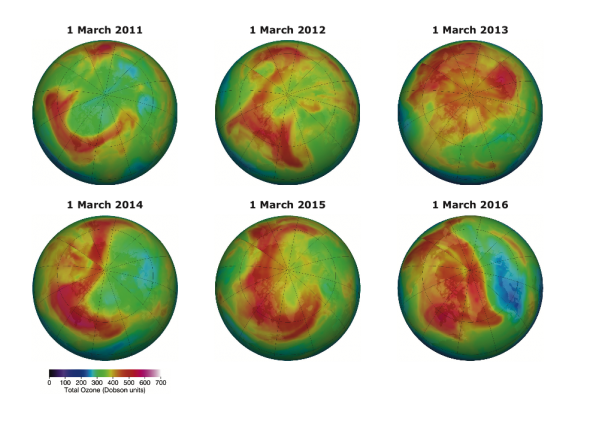 The Antarctic ozone hole is an annually recurring phenomenon, and every year a substantial amount of ozone is destroyed during the Austral spring from September to November. In the North, on the other hand, the variations from year to year are much larger: Some years experience almost no depletion of the stratospheric ozone layer, whereas other winters/springs suffer a significant degree of ozone loss.

The largest ozone loss experienced so far in the Arctic happened in 2011 when the chemically-induced ozone column loss at the end of March reached 38%. The degree of stratospheric ozone loss in the Polar Regions depends to a large extent on the meteorological conditions. The amounts of ozone depleting gases – chlorofluorocarbons (CFCs) and halons – in the stratosphere peaked around year 2000, then slowly started going down. The three ingredients needed to cause ozone loss are 1) chlorine and bromine released from the CFCs and halons, 2) low temperatures and 3) sunshine. The stratosphere still contains more than enough CFCs and halons to cause total destruction of ozone in the 15 to 20 kilometre altitude interval if the two other ingredients are present. This means that the degree of ozone loss will depend on the temperature conditions and for how long the low temperatures persist into the spring when the sun comes back after the polar winter. Low temperatures give rise to a special kind of clouds, so-called polar stratospheric clouds (PSCs). On the surface of these cloud particles, chemical reactions take place that convert innocuous halogen compounds into active chlorine (ClO) that is very efficient at destroying ozone.

The 2015/16 stratospheric winter has been characterized by record low temperatures in January, and the occurrence of PSCs has been much more widespread than in recent years. In early March, the chemically-induced ozone loss amounted to 28% of the total column. However, a major stratospheric warming event, which started in early March, precluded further ozone loss. A chemically-induced total ozone loss of 28% ranks the 2015/16 winter as the third most serious on record, behind 1994/95 (30%) and 2010/11 (38%). It should be noted that the 2016 results are preliminary. More details about Arctic ozone loss can be found in the WMO Arctic Ozone Bulletin.