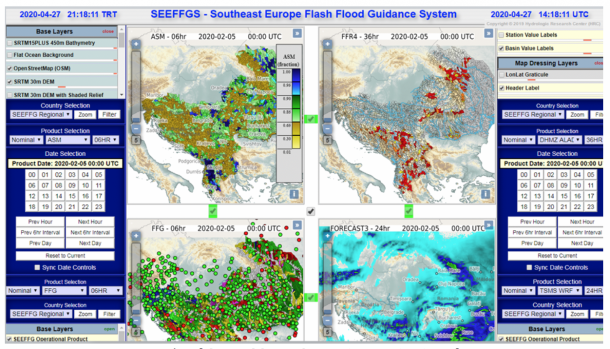 Flash floods are among the most dangerous of natural hazards. They can change the course of rivers, bury houses in mud and sweep away or destroy whatever is in their path in a very short time after an observable causative event. The Flash Flood Guidance System (FFGS) was developed for interactive use by meteorological and hydrological forecasters around the world. The system provides easily accessible, quality-controlled precipitation estimates based on data gathered from weather radar, satellites, measuring instruments, and Numerical Weather Prediction models.

The South East Europe Flash Flood Guidance System (SEE-FFGS) was established in 2013 in Albania, Bosnia and Herzegovina, Croatia, Moldova, Montenegro, North Macedonia, Romania, Serbia and Slovenia. Now, its forecasters have started to use a new “app” that generates phone and email alerts for flash flood threats with sufficient lead time for them to issue warnings to communities at risk.  The Turkish State Meteorological Service (TSMS) in Ankara, Turkey, which acts as the Regional Centre for SEE-FFGS, developed the app, which generates the alerts once the SEE-FFGS indicates a possible flash flood threat. The app supports the daily operational work of the forecasters and assists them to produce timely and accurate flash flood warnings.

The App provides detailed information about the possibility of flash flood occurrence, its location (county and sub-basin), sufficient lead-time to issue flash flood alerts and warnings, and other important information such as intensity of forecast precipitation and state of soil moisture. The powerful heads-up notification App is greatly appreciated by the SEE countries and other regions have expressed interest in using it.

The three-day event provided hands-on exercises and shared recent case study analyses from participating countries. An additional 30-day operational Information Technology online training will be given to 15 selected experts to ensure that the system is sustainable.