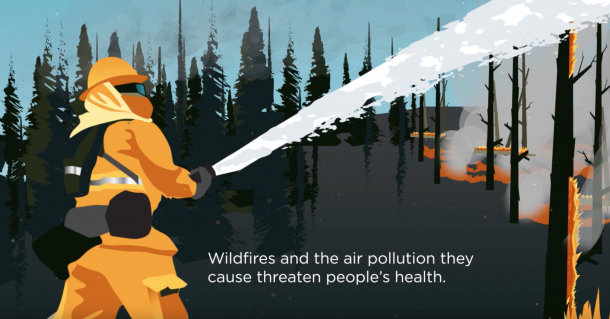 The 18th World Meteorological Congress in June endorsed an ambitious plan to advance the integration of weather, climate, water and environmental applications and services for health  (Resolution 33), and work closely with the World Health Organization to prevent health risks. Populations both near and downwind of raging wildfires are keenly interested in receiving better warnings about the fires themselves and related air quality risk levels as both are serious threats to life and health.

In addition to the direct threats from burning, wildfires also release harmful pollutants including particulate matter and toxic gases such as carbon monoxide, nitrogen oxides, and non-methane organic compounds into the atmosphere. Particles and gases from burning biomass can be carried over long distances, affecting air quality in regions far away. Wildfires also have an impact on climate by releasing carbon dioxide into the atmosphere, contributing to global warming. Particles can land on snow and ice, causing the ice to absorb sunlight that it would otherwise reflect, and thereby accelerating the warming in the Arctic.

From the Arctic to the tropics, wildfires have been raging over the recent months. Indonesia is currently in its wildfire seasons and  populations across the region are experiencing respiratory and other health problems from the dense smoke clouds. The United Nations Children’s Fund (UNICEF) reported on 23 September that wild forest and peatland fires across Kalimantan and Sumatra, Indonesia, are putting nearly 10 million children at risk from air pollution. Unusually high levels of wildfire activity within the Arctic Circle in the second week of June continued well into August, according to data from the Copernicus Atmosphere Monitoring Service (CAMS). The fires burnt in Siberia (Russian Federation), Alaska (USA), northern Canada and Greenland. Satellites also detected widespread fires and burning activities in southern African countries such as Angola. NASA satellites also confirmed an active wildfire year in the Brazilian Amazon.

Satellites are often the first to detect fires burning in remote regions. NASA’s primary tool for fire detections since 2002 has been the Moderate Resolution Imaging Spectroradiometer (MODIS) instruments on  the Terra and Aqua satellites. CAMS, which is implemented by the European Centre for Medium-Range Weather Forecasts (ECMWF), incorporates observations of wildfires from these instruments into its Global Fire Assimilation System (GFAS) to monitor fires and estimate the emission of pollutants from them. It assimilates fire radiative power observations from satellite-based sensors to produce daily estimates of biomass burning emissions. Atmospheric concentrations of trace gases and aerosols are measured by the Global Atmosphere Watch Programme. These measurements are essential for forecasts, research on atmospheric composition and to develop warning systems.

WMO has responded to urgent requests for assistance from Members in several impacted regions by initiating a Vegetation Fire and Smoke Pollution Warning and Advisory System (VFSP-WAS). The VFSP-WAS provides guidance for addressing both perils and proposes to support the potential foundation of regional centres on the topic. The Southeast Pacific, one of the regions most affected by vegetation fires and smoke pollution, has established the first Regional Vegetation Fire and Smoke Pollution Warning and Advisory Centre, operated by the Meteorological Service of Singapore.  The region is currently in its wildfire season and their forecasts are providing up-to-date and timely information for people to protect themselves. The Southeast Pacific Centre serves as a prototype for other centres to be established around the world. WMO encourages all Members impacted by wildfires and related health problems to participate in this activity and provide the relevant data and support for VFSP-WAS.