WMO elects new President and members of the Executive Council 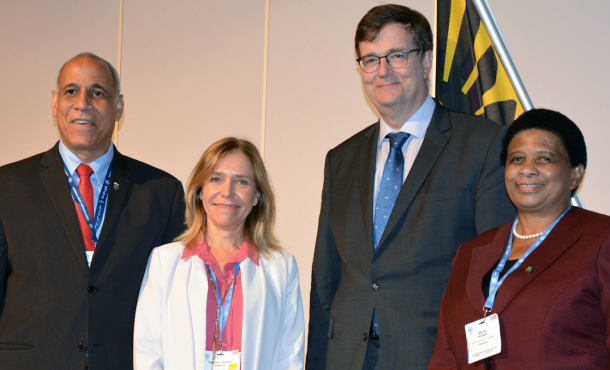 WMO elects new President and members of the Executive Council

Petteri Taalas of Finland, first appointed in 2015, was re-appointed WMO Secretary-General for a further four year-term.

Congress elected Gerhard Adrian of Germany as the new WMO President for a four-year term in office with effect from the end of Congress on 14 June.

“WMO sets the framework for the successful cooperation of its Member States to accomplish their tasks for the well-being of societies,” said Mr Adrian as he assumed his new duties. “My aim is that this infrastructure as well as the indispensable global exchange of data are improved even further and guaranteed into the future. It is our collective responsibility and my main interest to strengthen the WMO.”

Mr Adrian is President of the German Weather Service, a position he has held since 2010. He has been Germany’s Permanent Representative to WMO since June 2010 and a member of the Executive Council (EC) since 2011. He will preside over sessions of the Congress and the Executive Council held during his term of office and will guide and coordinate WMO activities.

"David has been able to create new structures for WMO,”  WMO Secretary-General Petteri Taalas said, underlining that they had a “common vision for a modernized WMO”.

“About 10 years ago, I wanted to make a difference to the world,” Mr Grimes told delegates who saluted him by a standing ovation.“I felt that I had the skills. I felt that I had the passion. And I had all of the interests of all of you in my heart. Maybe that has been part of the motivation that has made me work so hard over the last eight years.”