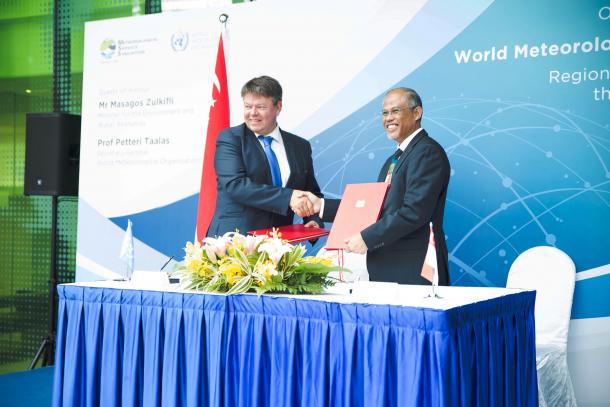 In August, WMO opened a new office for the Asia-Pacific region in Singapore aimed at improving coordination and strengthening meteorological services for rapidly evolving economic sectors such as air and marine transport. Hosted by the Meteorological Service Singapore (MSS), the new Office will serve as the nerve centre for WMO programmes in the region.

WMO Secretary-General, Petteri Taalas, and Singapore Minister for the Environment and Water Resources, Masagos Zulkifli, officiated the opening, which was held at the MSS Centre for Climate Research Singapore (CCRS), where the Office is co-located. This is the first time a WMO Regional Office will be located within Asia and the South-West Pacific and it is the second Regional Office to relocate from Geneva.

An important priority for the Office is to strengthen regional cooperation and coordination as well as implement WMO capacity-development initiatives. This will benefit not just WMO Members but also the user sectors and stakeholders that they serve. The Office will also act as a forum for regional challenges and work with Members to foster greater cooperation in multi-hazard early warnings through capacity-building programmes.

Singapore was selected because of its central position relative to WMO Asia and Pacific Member states, flight connectivity, and modern and accessible IT infrastructure. The Office is headed by WMO Asia-Pacific Regional Director Chung Kyu Park, who will relocate from WMO headquarters in Geneva.