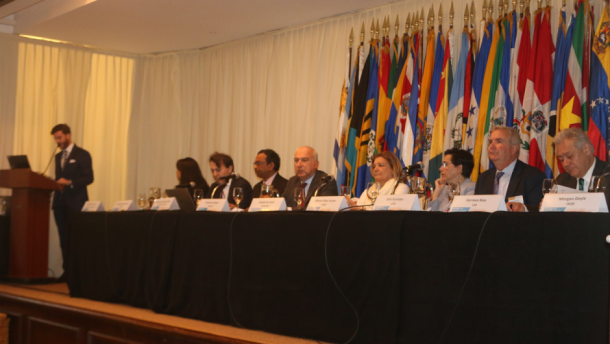 At the Latin American and Caribbean Climate Week held in Montevideo, Uruguay from 20 to 23 August, WMO showcased its observations-based tools to identify greenhouse gas sources and support emission reductions, as well as activities to build resilience to the impacts of climate change. The event was co-organized by a partnership of UN agencies, multilateral banks, a regional energy organization and a private sector association, and was sponsored by the UN Framework Convention on Climate Change (UNFCCC). It featured a high-level segment with UNFCCC Executive Secretary, Patricia Espinosa; Brazil’s Minister of Environment, Edson Duarte; and Uruguay’s Minister of Housing, Territorial Planning and Environment, Eneida de León.

WMO held a side event on its Integrated Global Greenhouse Gas Information System (IG3IS), which employs cutting edge science to establish the source of greenhouse gases and identify opportunities to reduce emissions including those that otherwise would not have been discovered. The side event made a strong case for scientific support services for carbon reduction policies both nationally and sub-nationally in the Latin American region.

During another side-event, Barbara Tapia and Rodney Martinez, experts of the WMO Commission for Climatology, presented on how WMO provides support to National Meteorological Services (NMHSs) in the region through the Regional Climate Centres (RCCs) for early warning systems, risk management and adaptation plans, including online risk maps that are increasingly used by national and local authorities in the region.

They also announced a plan for two new projects to help build resilience: