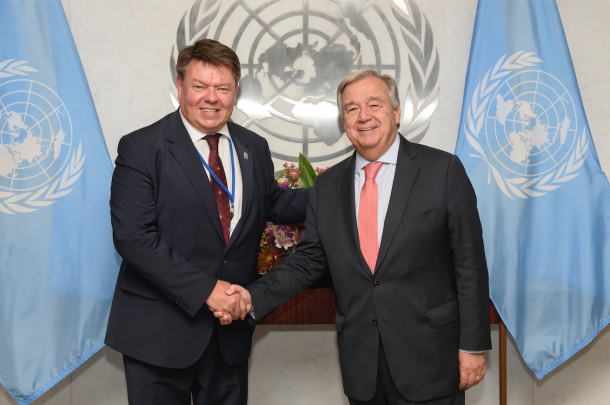 WMO is intensifying its scientific support and advice to United Nations Secretary-General António Guterres, who has made climate action one of his top priorities and convened a climate summit for September 2019.

Climate change is the defining issue of our time – and we are at a defining moment, according to Mr Guterres, who outlined his vision of raising ambition in support of the Paris agreement on climate change and the 2030 development agenda in a major policy statement on 10 September. He reiterated the urgency of the challenge in his opening address to the UN General Assembly on 25 September.

“According to the World Meteorological Organization, the past two decades included 18 of the warmest years since record-keeping began in 1850. This year, for the first time, thick permanent sea ice north of Greenland began to break up. The concentration of carbon dioxide in the atmosphere is the highest in 3 million years,” Mr Guterres told world leaders at the General Assembly. “We must listen to the Earth’s best scientists.”

Comprehensive, authoritative scientific advice will be presented in a special report of the Intergovernmental Panel on Climate Change (IPCC) on impacts of global warming of 1.5 °C above pre-industrial levels and related global greenhouse gas emission pathways. The report was requested by governments when they adopted the Paris Agreement on climate change, which aims to keep global temperature rise to well below 2°C above pre-industrial levels and to work to keep the increase as close as possible to 1.5 °C.