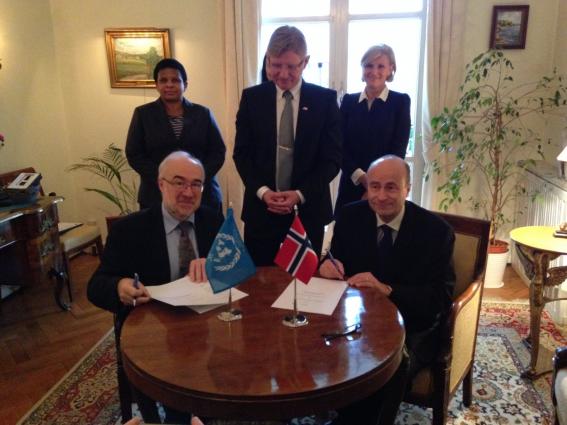 Secretary-General Michel Jarraud and State Secretary Hans Brattskar of the Norwegian Ministry of Foreign Affairs signed an agreement in the sidelines of COP 19 whereby the Government of Norway is contributing a grant of US$ 9 750 000 to launch the Climate Services Adaptation Programme in Africa.

A high-level WMO delegation participated in the 19th session of the Conference of the Parties (COP 19) to the UN Framework Convention on Climate Change (UNFCCC), held in Warsaw, Poland, from 11 to 22 November. The delegation also held numerous bilateral meetings with senior officials, monitored the negotiations to assess how the Convention’s growing needs will affect WMO programmes, contributed to various side events and symposia, and showcased WMO activities and publications at an exhibition booth. WMO released its annual Greenhouse Gas Bulletin for the year 2012 in advance of the Conference to inform the discussions. UNFCCC Executive Secretary Christiana Figueres reminded the audience at the opening COP 19 Plenary meeting of the conclusions of the Bulletin that atmospheric levels of greenhouse gases reached record levels in 2012. At the opening session of the Subsidiary Body on Scientific and Technical Advice (SBSTA), WMO Deputy Secretary-General Jeremiah Lengoasa informed delegates about the progress being made by the Global Framework on Climate Services (GFCS). The WMO address responded to a SBSTA request for information about the outcome of the 1st Session of the Intergovernmental Board on Climate Services (IBCS), which took place in Geneva in July.

WMO launched its provisional statement on the State of the Climate 2013 during the first week of the COP 19. The statement indicated that data for the first nine months of 2013 place this year on track to be the seventh warmest on record. The WMO results were of particular interest to both conference delegates and journalists because of the Typhoon Haiyan (Yolanda) tragedy in the Philippines. The statement highlighted other extreme events as well, including droughts, floods, heatwaves and storms that have occurred around the world thus far in 2013. Some 30 WMO Permanent Representatives (PR) participated in COP 19 as part of their national delegations. Directors of NMHSs played important roles in the discussions; for example, the PR of Swaziland chaired informal consultation meetings of the African Union, and the PRs of Myanmar and Niue and the Deputy Director of the Tajikistan meteorological service delivered speeches at the High Level Segment on behalf of their respective countries. Secretary-General Michel Jarraud and Assistant Secretary-General Elena Manaenkova met with President Jakaya Kikwete of the Republic of Tanzania. In addition, the Secretary-General attended a dinner hosted by UN Secretary-General Ban Ki-moon and held meetings with Minister Saviour Kasukuwere of Zimbabwe, WMO President Emeritus Alexander Bedritsky and many others.