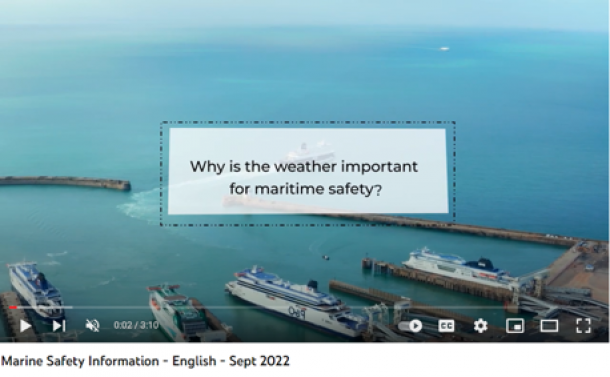 “International meteorological cooperation and maritime safety are cornerstones of WMO and the primary reason for the establishment in 1873 of the International Meteorological Organization, the predecessor to WMO,” stated WMO Deputy Secretary-General Dr Elena Manaenkova. She was addressing the joint meeting of the Sub-Committee of the Advisory Group on the Worldwide Met-Ocean Information and Warning Service with the International Hydrographic Organization (IHO)'s Worldwide Navigational Warning Service Sub-Committee in September.

The meetings brought the world’s METAREA and NAVAREA Coordinators together with representatives of the International Maritime Organization (IMO), International Mobile Satellite Organization (IMSO), and satellite communication companies. They discussed responsibilities, current operational status and ways to enhance the vital delivery of maritime safety information (MSI) to mariners. The key decisions adopted by the IMO Maritime Safety Committee (MSC) in April and its Sub-Committee on Navigation, Communications and Search and Rescue (NCSR) in June were also discussed. The meetings further addressed the expansion of satellite and terrestrial methods for promulgation of MSI, including updates briefs on the BeiDou SafetyLink service and NAVDAT.

The joint meetings achieved their objectives:

Towards the end of the joint Meeting, WMO showcased one of its new educational videos on the importance of weather in maritime safety and the critical role of National Meteorological and Hydrological Services (NMHS) – specifically, marine forecasters – in marine safety.

WMO remains committed to the International Convention for Safety of Life at Sea (SOLAS convention) through the broadcast of meteorological maritime safety information as part of the IMO Global Maritime Distress and Safety System (GMDSS). WMO supports the GMDSS through the IMO/WMO Worldwide Met-Ocean Information and Warning Service, which coordinates the broadcast of meteorological warnings and forecasts to the ocean regions through 21 defined areas (METAREAs), the background and history of which has been documented in the recently published Maritime Forecasting, Meteorology and WMO: History and Evolution (WMO MMO Series- No. 04).