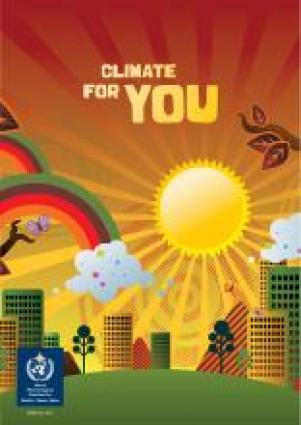 According to Titus Livius (~ 59 BC – AD 17) and his History of Rome, the lustrum was in ancient Rome a five-year period between two successive censuses, the first of which was established by ancient Rome’s sixth king, Servius Tullius, in the 6th century BC. This periodicity was maintained throughout the early Roman Republic as a natural cycle and today the term is freely used, in some languages, to designate any 5-year period.

For WMO, the lustrum which has concluded at the end of 2010 will surely be remembered as a vital preparatory period for the establishing of climate services. In November 2005 the Beijing-held WMO Technical Conference on Climate as a Resource advocated that nations mobilize their capabilities to facilitate the mounting societal demand for these services, noting that climate has both physical aspects which can shape the availability of natural resources, such as in particular renewable energies, as well as informational aspects that may be used, at least potentially, to support socioeconomic decision-making. Moreover, climate as a resource can have considerable influence on the management of other natural resources, in particular to optimize agricultural performance and food security, water management, health and many other essential applications, thereby posing very attractive challenges to the resourcefulness of the international hydrometeorological community.

The WMO Conference on Living with Climate Variability and Change: Understanding the uncertainties and managing the risks (Espoo, Finland, July 2006) underscored soon afterwards that, while climate is indeed a critical resource, we are also especially vulnerable to its variability and change. Accordingly, it anticipated that while some actions would have to be taken in urgency to manage the risks of climate variability and change impacts, others would be increasingly implemented to harvest the benefits to be derived from climate information and services, particularly by various socio-economic sectors which could thereby maximize their efficiency and productivity, while contributing to manage those risks.

In March 2007, WMO organized in Madrid the International Conference on Secure and Sustainable Living: Social and Economic Benefits of Weather, Climate and Water Services, which provided an outstanding opportunity for a wide exchange of views, expectations and knowledge across various societal sectors to optimize the decision-making process. Moreover, 2007 was the year when the WMO co-sponsored IPCC released its fourth Assessment Report and received the prestigious Nobel Peace Prize, as well as when the fifteenth World Meteorological Congress agreed to convene with partners a third World Climate Conference, in the spirit of the previous two historic World Climate Conferences which WMO had organized in 1979 and 1990.

Not long before the WCC-3 began, the WMO Executive Council decided at its sixty-first session in June 2009 that the theme of the World Meteorological Day for 2011, commemorating the coming into force of the WMO Convention on 23 March 1950, would be “Climate for you”.

However, more than just a single year, “Climate for you” can readily be recognized as the unofficial theme for the lustrum which has concluded at the end of 2010, when the High-level Taskforce presented to WMO the report mandated by the WCC-3 High-level Segment, including in particular the proposals for a Global Framework for Climate Services (GFCS), its implementation principles, recommended structure, governance suggestions and possible initial priorities.

As WMO has recently reported, 2010 was the warmest year on record, at the same level as 1998 and 2005, since the relative differences between the three years were less significant than the uncertainty margin, which only confirms the observed long-term warming trend highlighted by the IPCC report, for all of the ten warmest years on record were experienced since 1998. Additionally, over the ten years elapsed since 2001, global temperatures averaged almost half a degree above the 1961-1990 mean, the highest ever recorded for any 10-year period since the beginning of instrumental climate observations.

Less than two months from now, next May, the High-level Taskforce report will be among the key issues to be considered by WMO Members during the sixteenth World Meteorological Congress, heralding a new era thereafter in international cooperation in the provision of climate information and services for decision-making.

WMO activities in the area of climate are widely perceived today as key contributions to human safety and well-being and the realization of economic benefits for all nations, thereby bringing us even closer to the spirit of our founding mandate, the WMO Convention, which came into force sixty-one years ago on this date, as well as to the patrimony of the former International Meteorological Organization (IMO) established by the First International Meteorological Congress (Vienna, September 1873).

These actions will also sustain the attainment of another vital WMO objective: that of halving by 2019 the 1994-2003 ten-year average of deaths caused by disasters of meteorological and hydrological origin. Furthermore, they will support the objectives of the Fourth United Nations Conference on the Least Developed Countries (LDC-IV), which will soon take place in Istanbul, and the achievement of the UN Millennium Development Goals (MDGs), particularly in terms of eradicating by 2015 extreme poverty and hunger and of ensuring environmental sustainability.

Therefore, on the occasion of the World Meteorological Day for 2011 and on behalf of WMO, I would like to express our appreciation to all those colleagues across WMO's 189 Members who, over the last years, have actively contributed to these key objectives, for theirs is the merit of facilitating “Climate for you”.