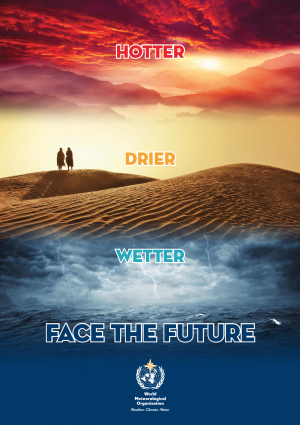 Our climate is changing. This is not just a future scenario. It is happening now. The climate will continue to change over the coming decades as more and more heat-trapping greenhouse gases emitted by human activities accumulate in the atmosphere.

Each of the past several decades has been significantly warmer than the previous one. The period 2011–2015 was the hottest on record, and the year 2015 – with an extra boost from a powerful El Niño – was the hottest since modern observations began in the late 1800s.

But rising temperatures tell only part of the story. Climate change is disrupting the natural pattern of the seasons, and it is increasing the frequency and intensity of certain extreme weather events, such as heatwaves, droughts and heavy rainfall. These ongoing changes provide a foretaste of a hotter, drier, wetter future.

It is still possible to minimize the damage. In December 2015 the world’s governments unanimously adopted the Paris Agreement, providing for rapid and deep cuts in greenhouse gas emissions. This historic agreement commits all countries to undertake ambitious efforts to respond to the urgent threat of climate change on the basis of their “common but differentiated responsibilities”. It also addresses financial support to developing countries, climate resilience and adaptation, loss and damage, technology transfer, capacity-building, and education, training and public awareness.

Meanwhile, scientific advances are making it possible to produce increasingly useful climate information and services to support climate resilience, adaptation and mitigation. The World Meteorological Organization and the global network of National Meteorological and Hydrological Services have a major role to play in providing the scientific observations, research and operational climate services that society will need in order to face the future.

The world just had its hottest year, hottest five year period and hottest decade on record. 15 of the 16 hottest years on record have occurred this century.

The global average surface temperature in 2015 smashed all previous records, and was about 0.73°C above the 1961-1990 average of 14.0°C. For the first time, the temperature reached the milestone of 1°C above the pre-industrial 1880-1899 period. This means we are already half-way towards the 2° C limit, above which life on the planet will become increasingly precarious.

In 2015 the long-term rise in global temperatures, caused mainly by greenhouse gas emissions, combined with the effects of a powerful El Niño to turn up the heat.  Large areas of South America, Africa, much of Europe, northeast Eurasia, the Middle East and western parts of North America were particularly warm. Continental temperature records were set for Asia and South America.

2011-2015 was the hottest five-year period on record. Climate change increased the risk of heatwaves, by a factor of ten or more during that period, according to scientific assessments.

The 21st century witnessed a number of major heatwaves. This includes heatwaves in India in 2002 and 2003 which each killed more than 1 000 people; the 2003 summer heatwave in Europe which caused more than 66 000 deaths and the intense heatwave in the Russian Federation in July/August 2010

Oceans are storing more than 90% of the excess energy trapped by greenhouse gases and will continue to warm throughout the century.

The Arctic is heating at roughly twice the speed of the global average, and this will have a lasting and far-reaching impact on other parts of the world.

Highest surface temperature ever recorded in southern hemisphere was 50.7°C in Oodnadatta, Australia

Rainfall varies naturally from year to year and from decade to decade, influenced by the El Niño-Southern Oscillation (ENSO) and other climate drivers.

In addition to natural climate variability, climate change caused by greenhouse gas emissions will have an increasing impact on the water cycle. According to the Intergovernmental Panel on Climate Change, the contrast in precipitation between wet and dry regions and between wet and dry seasons will increase during the 21st century.

Wet areas will become wetter, and dry areas drier. The extent and speed of these changes will depend on whether we achieve the target of keeping temperature increases to less than 2°Celsius above the pre-industrial era.

Temperature increases above the 2°C limit will mean more water stress. Scenarios by the World Bank suggest that in a 4°Celsius warmer world, roughly 1 billion people living in monsoonal basins and the 500 million people living in deltas are especially vulnerable. Poorer countries, which contributed least to the problem, will be most affected. http://www.worldbank.org/en/topic/water/overview

Population increase, rising water usage by sectors like agriculture and pollution add to the challenges of water management regardless of the amount of rainfall.

Too little precipitation leads to droughts. These affect more people than any other kind of natural hazard owing to their large scale and long-lasting nature.

During the 21st century, drought in East Africa in 2004 and 2005 resulted in widespread loss of life and food shortages. A drought in 2010-11 contributed to famine in Somalia which was responsible for approximately 258,000 excess deaths. according to the Famine Early Warning Systems Network.

The arrival of El Niño in 2015 brought significant droughts to many parts of the world. These included southern Africa and Ethiopia, Indonesia – which also suffered from severe forest fires – the islands of the western South Pacific, Central America and the Caribbean, and parts of the Indian subcontinent.

Precipitation (rain and snow) varies naturally from year to year and from decade to decade, influenced by the El Niño-Southern Oscillation (ENSO and other climate drivers.
In addition to natural variability, it is likely that climate change is also influencing the frequency and intensity of extreme precipitation because warm air can hold more moisture.
Greater warmth also speeds up the water cycle, which is likely to lead to increased evaporation and heavier rainfall. More intense rainfall during tropical storms and rising sea levels poses a particular risk to coastal regions.
The changes in the water cycle will not be uniform.  The contrast in precipitation between wet and dry regions and between wet and dry seasons will increase during the 21st century, although there may be regional exceptions, according to the Intergovernmental Panel on Climate Change.
A WMO survey in 2010 found that the largest number of national records for 24-hour extreme precipitation occurred in the previous two decades – 1991-2010. Floods were the most frequent extreme event.

Floods in Pakistan killed more than 2 000 people and affected 20 million in 2010, the wettest year on record.

The Southeast Asian floods of 2011 caused economic losses of more than US$40 billion, mostly in Thailand, and were responsible for more than 800 deaths. A flash flood in southern Brazil in January 2011 claimed more than 900 lives.

Floods and landslides in Uttarakhand, northern India, in June 2013 left more than 5 800 people dead or missing.  Floods in central Europe in May and June 2013 caused economic losses of more than US$20 billion.

Typhoon Haiyan hit the Philippiines on 8 November. It killed at least 6 300 people, mostly from the tsunami-like storm surge. The island of Leyte had rainfall totals greater than 500mm, with a peak amount of over 685 mm  because of Haiyan and another tropical storm.

Extensive flooding in the Paraná river basin in central South America in June and July 2014 affected more than 700 000 people in Paraguay, western Brazil and northern Argentina.

Destructive flooding occurred in many parts of the world in 2015, causing major casualties and humanitarian impacts, heavy economic losses or both.

The powerful El Niño meant that 2015 was wet in many subtropical parts of South America (including Peru, northern Chile, Bolivia, Paraguay, southern Brazil and northern Argentina), and in parts of the southern United States and northern Mexico. Overall, global precipitation in 2015 was close to the long-term average, but there were a number of extreme events during the year. There were many instances in 2015 of 24-hour totals exceeding the normal monthly mean.

ortunately, the world’s governments are now fully convinced of the scientific evidence of climate change and the need to take urgent action. More research and investment is needed for advancing low-carbon technol- ogies, particularly in the energy sector. But already many policies, technologies and actions are available, and their deployment needs to be scaled up. Individual citizens, community leaders, businesses, civil society organiza- tions, governments and the United Nations system must all contribute.

Science will continue to play a vital role. Continued and improved scientific observations of the climate system will make it possible to monitor progress in reducing emissions of heat-trapping greenhouse gases. Continued and improved scientific research will lead to a better understanding of climate change at the national and regional levels, of its impacts, and of solutions for adaptation. Science will also help to identify practical solutions for reducing greenhouse gas emissions and steering the international community towards a greener future.

The World Meteorological Organization is committed to contributing to these efforts. WMO co-sponsors and hosts the Intergovernmental Panel on Climate Change, whose regular assessment reports provide a strong basis for policy action. WMO is also the main co-sponsor and the host of the Global Climate Observing System and the World Climate Research Programme. The growing network of WMO Regional Climate Centres and Climate Outlook Forums is building capacity at the national and regional levels. WMO plans to develop an integrated greenhouse gas monitoring system for informing decision-makers about progress in reducing greenhouse gas emissions.

Because climate change poses a fundamental challenge to humanity, it is integrated into the United Nations Sustainable Development Goals that will drive the global agenda through the year 2030. By acting on the basis of the best available science, and drawing on growing reserves of political will and public support, the international community can succeed in building an environmentally sustainable and economically prosperous world.