Powering our future with weather, climate and water (2012) 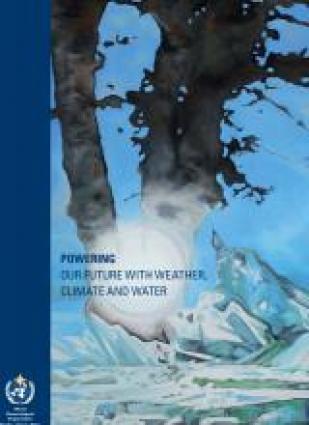 Powering our future with weather, climate and water (2012)

Whereas the non-governmental IMO was not associated with the League of Nations, the new Organization became a specialized agency of the United Nations System as early as 1951. By 1972, WMO began to expand its original mandate in meteorology and climate to increasingly include water as well as a number of environmental issues.

Such a theme seems especially appropriate this year, as in 2011 the Sixteenth World Meteorological Congress unanimously agreed to launch in 2012 a Global Framework for Climate Services (GFCS), responds to the mandate of the Third World Climate Conference (WCC-3) which, in the Summer of 2009, followed-up on the first two historic World Climate Conferences convened by WMO with partners in 1979 and 1990.

As you are aware, the Intergovernmental Panel on Climate Change (IPCC), which WMO created and has been successfully co-sponsoring with UNEP since 1988, and which at the end of 2007 received the prestigious Nobel Peace Prize, has unequivocally demonstrated that certain human activities are contributing to the warming of the climate system and have dire effects on our natural environment, such as increases in global average air and ocean temperatures, widespread melting of snow and ice and rising global average sea levels. This is an issue which the UN Secretary-General has characterized as the “defining challenge of our era”.

Accordingly, it will be extremely important to ensure that in all our efforts to implement the GFCS, in particular to contribute to sustainable development, we always keep in mind the need to minimize as much as possible the atmospheric release of greenhouse gases.
The Sixteenth WMO Congress in 2011 also agreed that the four initial GFCS priorities would be disaster risk reduction, water, health, and food security. The first of these GFCS priorities, disaster risk reduction, has been for years a high WMO priority and it continues to be so, especially since vulnerable communities around the globe are struggling to increase their effectiveness in preventing or mitigating natural disasters, close to 90 per cent of which over the last 50 years have been linked to weather, climate and water hazards and fall therefore within the mandate of WMO.

The number of these vulnerable communities has augmented over the last decades as a result of increased urbanization, population shifts into more fragile areas, such as coasts, lowlands, arid regions, megadeltas and floodplains.

This issue is critically coupled with the increase in the frequency and intensity of a number of extreme events anticipated by the IPCC Fourth Assessment Report. Accordingly, decision-makers and emergency response managers will increasingly require more and better weather and water information and climate services to formulate the most appropriate contingency plans.

The provision of weather-, climate-, and water-related information is also needed to support several vital socio-economic activities like agriculture, health, transport, energy generation and water resources management, all of which have the potential to provide considerable developmental benefits through a relatively moderate investment, particularly in capacity development.

In the course of the recent UNFCCC COP 17 session in Durban (South Africa), WMO once more underscored that improved research, observations, prediction and capacity development will be essential elements for the protection of life and property in the most vulnerable countries, a number of which already have considerable difficulties in maintaining their respective hydrometeorological observing and telecommunications networks and will need enhanced support to bridge the scientific and technological gap with the developed world.

Furthermore, WMO has continued to stress that Least-developed Countries (LDCs), Small Island Developing States (SIDS) and other vulnerable developing countries should be increasingly empowered to use early warning systems to safeguard their fragile sustainable development, as well as the environment and the global climate, for present and future generations.

Therefore, the theme for World Meteorological Day-2012 is particularly appropriate to afford all WMO Members a key opportunity to illustrate some of the most significant benefits which can be derived from weather, climate and water observations and predictions, in particular from the perspective of climate as a resource and to power their sustainable development through the GFCS.

These benefits will be vital for all resources areas and at all scales. To focus on an example which transcends the four initial GFCS priorities, as in the case of energy generation, while many renewable energy projects must necessarily be large-scale, several “green” technologies like wind, solar and hydropower are especially well-suited for the rural and remote areas, where local energy resources are often indispensable for human development.

Millions of households receive power from small-scale domestic solar systems, while micro-hydro systems, configured at village-scale or county-scale mini-grids, can be used advantageously in certain areas. Dams used to store hydropower have long been an important element of the world's energy supply, currently generating about one-fifth of global electricity needs.

Wind power has also been expanding, despite the need for substantial infrastructural investments before it can be harnessed. Towards the end of 2010, the worldwide installed capacity of wind-powered generators reached nearly 200 Gigawatts (GW), corresponding to about 2.5 per cent of the global electricity consumption.

To determine the feasibility of wind or solar power in a given area, it is always necessary to access reliable climate data. Solar power, in particular, can be much more feasible for some regions of the world than for others. The World Standard Reference instrument for solar radiation measurements is maintained by the World Radiation Centre in Davos (Switzerland) and the WMO World Radiation Data Centre (WRDC) is located in Saint Petersburg (Russian Federation).

Additionally, more and more rural households are adopting lighting and cooking systems based on locally produced biogas. Biomass production involves using garbage or even crops, such as corn, sugar cane or other vegetation, to generate bio-fuel or as a direct combustion material. However, care must be exercised not to release an even more powerful greenhouse gas into the atmosphere than the one we seek to avoid in the first place, as well as not to jeopardize, through energy generation, the food security resources of the concerned population.

Through its 2010 report Energy for a Sustainable Future, the UN high-level Advisory Group on Energy and Climate Change has reported that, by scaling up renewable energy and other low-emission technologies, it would be possible to provide universal access to modern energy services by 2030 without significantly increasing greenhouse gas emissions.
In the context of the UN System, WMO actively participates in UN-Energy, the principal interagency mechanism in the field of energy charged with ensuring UN system coherence in its response and the collective engagement of non-UN stakeholders.

Before concluding this Message, allow me to recall that the (provisional) 2011 WMO Statement on the status of the climate, released recently, clearly underscores the continuing changes in our climate. The 13 warmest years on record have all occurred since 1997 and global temperatures in 2011 were higher than any previous La Niña year, an event which usually has a cooling influence.

Concentrations of greenhouse gases in the atmosphere have continued to increase unabated, reaching an all-time high in 2011, while the extent of Arctic sea ice cover last summer was the second lowest on record and the overall sea ice volume was most likely the lowest ever registered.

Weather, climate and water have been powering our socioeconomic development for years and they shall increasingly contribute to meet the challenges of the future, especially in the context of the new Global Framework, for which WMO and the National Meteorological and Hydrological Services (NMHSs) of its 189 Members will continue to provide the main thrust in terms of authoritative scientific knowledge; of timely weather and climate data and products; and from now on, of climate services, for the benefit of all socioeconomic sectors.

We shall increasingly rely on the GFCS in the context of the UNFCCC because, it will not only contribute to the climate change mitigation measures which must imperatively be adopted in urgency, if we are indeed to survive as a civilization, but it will also be invaluable for natural disaster risk reduction as well as more generally in adapting to the climatic changes to which we are already committed on account of the inertia of the climate system.