The Sun’s impact on the Earth 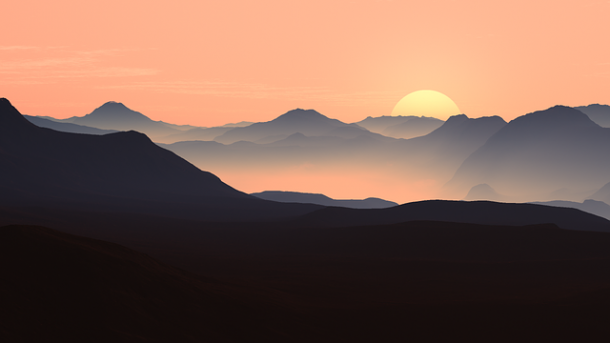 The Sun’s impact on the Earth

The air surrounding us consists of different gases and also some particles. This layer of air, known as the Earth’s atmosphere is retained by gravity. The two main components are nitrogen (78%) and oxygen (21%). Besides containing the oxygen human beings and other organisms need to live, the atmosphere has a number of other “features” such as absorption of ultraviolet radiation from the Sun by the ozone layer and heat retention known as the greenhouse effect.

Solar radiation that is not absorbed or reflected by the atmosphere (for example by clouds) reaches the surface of the Earth. The Earth absorbs most of the energy reaching its surface, a small fraction is reflected. In total approximately 70% of incoming radiation is absorbed by the atmosphere and the Earth’s surface while around 30% is reflected back to space and does not heat the surface. The Earth radiates energy at wavelengths much longer than the Sun because it is colder. Part of this longwave radiation is absorbed by greenhouse gases which then radiate energy into all directions, including downwards and thereby trapping heat in the atmosphere.

Without this natural greenhouse effect, the Earth’s average surface temperature would be an inhospitable  -18°C (0°F) instead of the 14°C (59°F) we experience today. This effect is enhanced by increasing greenhouse gas concentrations in the atmosphere due to emissions by human activities such as burning fossil fuels. The main long-lived greenhouse gases are carbon dioxide (CO2), methane (CH4) and nitrous oxide (N2O). But they are not the only forces at work.

Water vapour is the most abundant greenhouse gas. It does not stay in the atmosphere for very long but plays a key role in our climate and its variability and change.

Ozone in the lower part of the atmosphere acts as a greenhouse gas and is a major pollutant. Higher up, in the stratosphere, the ozone layer absorbs solar ultra-violet radiation and affects how much of the Sun's heat is radiated back into space. The ozone layer shields us from the harmful effects of excessive UV radiation, which can lead to sunburn, skin cancer and eye damage.

Aerosols affect many aspects of human health and the environment, visible in the case of strong smog or haze events. Aerosols influence Earth’s climate both directly, by scattering and absorbing sunlight, and indirectly, by altering the reflectivity of clouds. In general, aerosols have a cooling effect on climate, which partially counterbalances the heating effect of greenhouse gases. Under certain circumstances, however, they may cause additional heating, such as the case of black carbon in soot.

The gases and dust particles thrown into the atmosphere during volcanic eruptions have influences on climate and cool the planet by shading incoming solar radiation. The cooling effect can sometimes last for months to years.

Albedo is the ability of a surface to reflect sunlight (solar radiation). Snow and ice have high albedo – much of the sunlight hitting surfaces covered with snow and ice bounces back. In contrast, dark earthy surfaces have a low albedo, therefore, they absorb more sunlight. Thus, the proportion of Earth’s surface that is covered by ice and snow affects how much of the Sun’s solar radiation is absorbed, warming the planet, or reflected. Therefore, snow and ice which are covered in soot from pollution no longer reflect sunlight, but absorb it and so melting increases.

The more snow and ice in the Arctic and Antarctic melt, the more dark surfaces. Hence, the feedback of climate change in the Polar regions is further warming, exacerbating climate change globally.

The Sun and the Water Cycle

Earth contains about 1.4 billion km3 of water. The oceans hold 1.3 billion km3, and 71 km3 is fresh water, of which more than two thirds is in the form of snow or ice.

The Sun plays a key role in the hydrological cycle, constantly evaporating water into the atmosphere. Some of that water is returned as rain, snow and dew. Part of this precipitation is rapidly evaporated back into the atmosphere. Some drains into lakes and rivers to commence a journey back to the sea. Some infiltrates into the soil to sustain groundwater or soil moisture. Under natural conditions, the groundwater gradually works its way back into surface waters and makes up the main source of dependable river flow. Plants incorporate some of the soil moisture and groundwater into their tissues, and release some into the atmosphere in the process of transpiration. The hydrological cycle moves enormous quantities of water about the globe, all thanks to the energy from the sun.

World Water Day on 22 March every year focuses attention on the importance of water. The theme for 2019 is Leaving No One Behind. It adapts the central promise of the 2030 Agenda for Sustainable Development that as sustainable development progresses, everyone must benefit.

Over the span of 11 years, the Sun’s activity waxes and wanes as magnetic field lines that are wound and tangled inside the Sun periodically break through to the surface. These breakthroughs produce sunspots that travel together across the face of the Sun. The heightened magnetic activity associated with sunspots can lead to solar flares, coronal mass ejections, and other far-reaching electromagnetic phenomena that endanger astronauts and damage or disrupt satellites. A number of national meteorological services are developing a space weather forecasting system to meet these challenges.

The effects of Space Weather can range from damage to satellites arising from charged particles to disruption of power grids on Earth during geomagnetic storms, radio black-out on trans-polar aircraft routes, or disturbance of satellite positioning systems. Space Weather monitoring, study and applications are more and more important with the increasing use of space in day-to-day life for telecommunications, observation and navigation.

The Aurora Borealis (Northern Lights) and Aurora Australis (Southern Lights) are the only visible manifestation of space weather. Energy from the ever-present solar wind or from coronal mass ejections is transferred into the Earth system and ultimately leads to the excitation of oxygen and nitrogen molecules in the upper atmosphere.  When these molecules relax back down to lower energy states, they release their energy in the form of light, similar to how a neon light works.

Due to the shape of Earth's own magnetic field, the aurora appears in two ovals around Earth's magnetic poles. As the driving geomagnetic storm intensifies, these ovals expand equatorward. In the most extreme geomagnetic storms, this can lead to aurora being visible nearly worldwide.

An ash cloud from the eruption of Mount Pinatubo in the Philippines in 1991 — one of the largest in the past 100 years — circled the globe in 22 days and caused the equivalent to a global cooling of at least 0.5 to 0.7°C.