The Sun and climate change 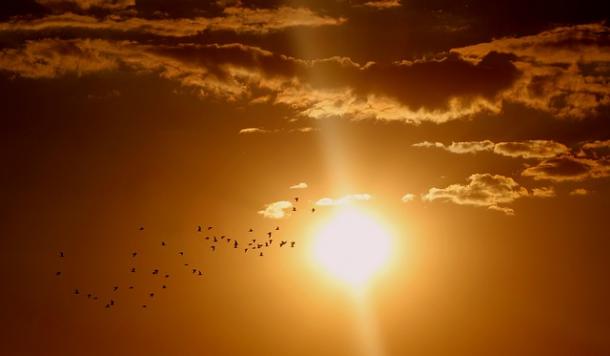 The Sun and climate change

When Earth emits the same amount of energy as it absorbs, its energy budget is in balance, and its average temperature remains stable. However, since the start of the industrial era in the second part of the 19th century, average global temperatures have risen by about 1 °C.

This current climate change is happening in order of magnitudes faster compared to climate fluctuations due to Earth’s orbit around the Sun. This unprecedented speed makes it hard for ecosystems as well as humankind to adapt.

Satellite measurements taken over the past 30 years show that the Sun’s energy output has not increased and that the recent warming observed on Earth can not be attributed to changes in Sun  activity.

The rise in temperatures – which are melting ice and heating the oceans – is driven by long-lived greenhouse gases in the atmosphere. Carbon dioxide (CO2) concentrations reached 405.5 parts per million (ppm) in 2017 and continue to rise. Since 1990, there has been a 41% increase in total radiative forcing – the warming effect on the climate - by long-lived greenhouse gases. CO2 accounts for about 82% of the increase in radiative forcing over the past decade.

If the current trend in greenhouse gas concentrations continues, we may see temperature increases of 3°C to 5°C by the end of the century. This is well above the target of the Paris Agreement of the United Nations Framework Convention on Climate Change (UNFCCC), which aims to hold the global average temperature increase to below 2°C and as close as possible to 1.5°C.

The 20 warmest years on record have been in the past 22 years, with the top four in the past four years.

Climate change has led to an increase in heat extremes, and new temperature records – at local daily levels as well as at national, regional and global level. Heatwaves are starting earlier and ending later in the year and becoming more frequent and intense as a result of climate change.

Climate models project increases in mean temperature in most land and ocean regions, hot extremes in most inhabited regions, heavy precipitation in several regions and the probability of drought and precipitation deficits in some regions. Climate-related risks to health, livelihoods, food security, water supply, human security, and economic growth are projected to increase with global warming.

The Earth has had more than 400 consecutive months with global temperatures above the 20th century average. The last colder than average month was in December 1984.

Global average temperature is about 1°C above the pre-industrial era. Global emissions of CO2 need to reach ‘net zero’ around 2050 to keep temperature increases to 1.5°C.

IPCC: Limiting warming to 1.5 °C rather than 2 °C could result in 420 million fewer people being exposed to severe heatwaves.

WMO Statement on the State of the Global Climate

What role has the Sun played in climate change in recent decades?