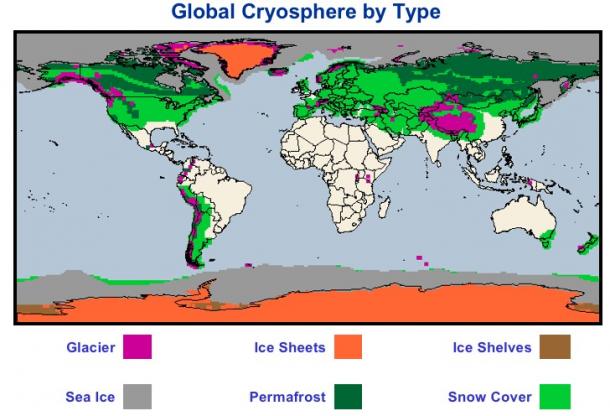 The cryosphere extends globally, existing seasonally or perennially at most latitudes, not just in the Arctic, Antarctic, and mountain regions, and in approximately one hundred countries. Approximately 70% of the Earth’s freshwater exists as snow or ice.

Snow and ice data are required for weather and climate research and applications. As the cryosphere changes due to climate change, this has major impacts on society, on the availability of freshwater resources, agriculture, transportation, safety and security, hydropower production, recreation, increasing the risk of floods and droughts, and affecting the viability of ecosystems.

Most people on Earth depend directly or indirectly on the cryosphere. For example, as all major rivers originate from mountains, the mountain cryosphere plays an important role in providing and regulating freshwater resources for around half of the world’s population, including for those living in lowland areas, such as the Ganges-Brahmaputra Delta. Furthermore, alterations and loss of critical snow and ice are increasing the risk of related disasters.

WMO has assumed a leading role in facilitating the access to accurate and timely information on cryosphere to support specific needs of its Members, to strengthen its ability to support ongoing development and delivery of weather, climate, and water services contributes to ensuring the sustainable development and well being of nations.

The role of WMO in the cryosphere domain has become essential as the changing environments have increased the demand for sustainable services in polar and high-mountain areas and downstream, which depend on the integration of actionable information on the state of the cryosphere. WMO, with the cooperation of other national and international bodies and organizations, is actively supporting the development of critical services delivered by its Members and partners, by stimulating innovation and in transferring research results to operations and enhance services. 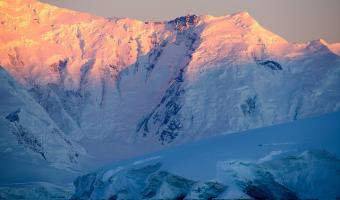 The Executive Council Panel on Polar and High Mountain Observation, Research and Services (EC-PHORS) plays a meaningful role on overseeing, coordinating and monitoring how polar and high-mountain observations, research, services and policies are developed and implemented within and externally to WMO, in response of significant changes in the polar and high mountain environments.

The WMO's Global Cryosphere Watch (GCW) fosters international coordination and partnerships between scientific and operational communities with the goal of meeting the cryosphere data and information need of Members and partners, in support of Earth system monitoring, modeling and prediction.

GCW operates under the remit of the Infrastructure Commission (INFCOM). 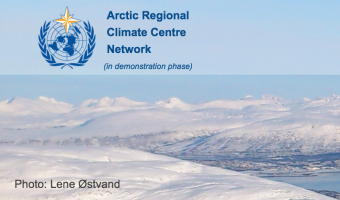 There is a growing need for useful and targeted climate information to support effective decisions and to help mitigate risks to indigenous and other people living in the Arctic, their governments, businesses and the environment. WMO Members expressed an interest in the Polar Regions and have committed to work together to developing services and products they would consider being mandatory and/or highly recommended functions of an Arctic Regional Climate Centre Network (ArcRCC-Network), to address these needs. 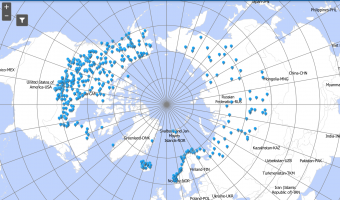 The Arctic-HYCOS project aims to collect and share hydrological data and information for the Arctic basin to enable better climate research and predictions in the Northern Hemisphere. The project serves as a vital platform for the regular collection and free exchange of Arctic hydrological data from all participating nations.

A record breaking summer in the Arctic

Temperatures in the Arctic are rising faster than the global average. Unique amplification processes and feedbacks, such as the rapid decline of sea ice significantly contribute to this warming. The effects vary in time and scale across the Arctic, and the consequences of a warming Arctic will be far-reaching across the northern hemisphere. Read more... 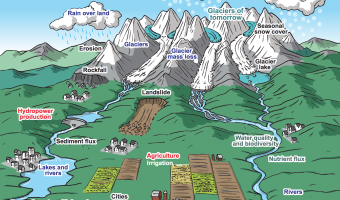 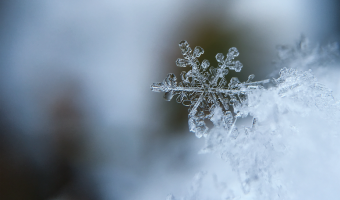 Guide to Instruments and Methods of Observation Vol II.png